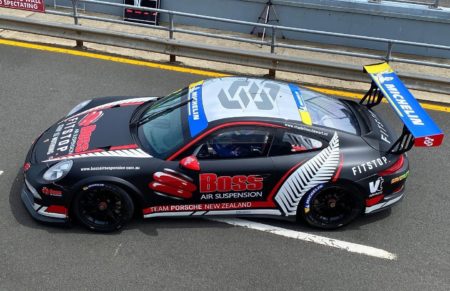 Madeline Stewart has revealed her Porsche 911 GT3 Cup racing livery for the 2021 Porsche Michelin Sprint Challenge Australia series. The young New Zealand driver is based on the Gold Coast and is part of Team Porsche New Zealand run by Earl Bamber Motorsport (EBM). The striking team livery is predominantly black and red with a white fern down the side of the car.

Madeline will again partner with Boss Air Suspension for her 2021 campaign. The global aftermarket air suspension manufacturer originally came on board for, what turned out to be, a very disrupted 2020 season, which saw Madeline finish third in the first round of Super 3 series at Sydney Motorsport Park, before taking victory in the Townsville Tin Top event.

She then went on to complete the year in a Porsche 911 GT3 Cup car finishing fourth at The Bend Motorsport Park Tin Top races. Boss Air Suspension is joined by Stewart’s other partners, Fitstop and Melbourne based VT Advisory.

Madeline Stewart said, “I am very excited to be racing in the Porsche Michelin Sprint Challenge this year. I am looking forward to having a great year with Team Porsche New Zealand and Earl Bamber Motorsport.”

“To have a fern on the side of my car and to be representing New Zealand is amazing. I cannot thank everyone who has helped make this happen enough.”

The livery reveal of the Porsche 911 GT3 Cup Car comes as Madeline is set to have her first outing in the car at Phillip Island, as a shakedown before the opening round of the series in the coming weeks.