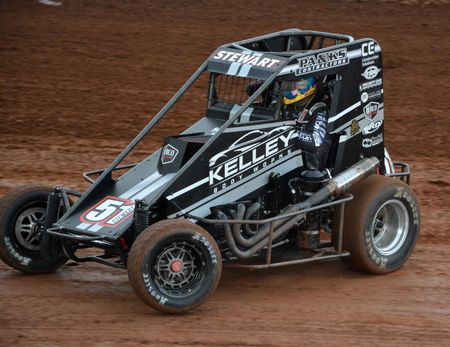 It has certainly been a long time coming, but the moment has finally arrived for the retyurn of one of Australian speedway’s most time-honoured events with the staging of the 2021/2022 Australian Midget Championship at Archerfield Speedway this weekend. Forced into hiatus due to the COVID pandemic, the event was last held in the 2019/2020 season and was won by classy Californian Carson Macedo at Warrnambool’s Premier Speedway. On Friday and Saturday night (January 28/29), the affable American will finally be afforded an opportunity to defend his title, taking on more than 40 other drivers from three states in what will be the 80th staging of the event. Having scored an emphatic win at Archerfield just two weeks ago, Macedo comes into the weekend in a very strong position to retain his crown, although he will certainly be faced with a somewhat tougher task given the field includes two former winners of the event in Kaidon Brown and Nathan Smee, the latter of whom was every bit as impressive as Macedo in winning the Queensland Championship last weekend.

With his victory in Warrnambool, Macedo became the seventh American driver to win the event, which has its origins as far back as 1935 when Victoria’s Bob Finlay won what is generally regarded as the first legitimate National Midget (Speedcar) Championship. A dozen years later, it was the future Formula 1 World Champion Jack Brabham who took out the event, which has subsequently been won by legendary figures such as Andy McGavin, Ray Revell, Len Brock, Johnny Stewart, Blair Shepherd, Ron Wanless, Ronald Mackay, George Tatnell, John Fenton, Keith Mann, Warrenne Ekins, Michael Figliomeni, Adam Clarke and many more besides. Whilst American star Bob Tattersall won the race on two occasions in the late 1950s, it took until the 2002/2003 season before another American emerged victorious. Since then, such has been the dominance of overseas drivers that Smee and Brown comprise two of just seven Australian competitors who have won the event since the turn of the century, with New Zealander Michael Pickens and half a dozen Americans having accumulated nine victories between them in that time. Smee added his name to the winners list when he took out the 2009/2010 event at Avalon Raceway, while Brown is a much more recent winner, having prevailed at Murray Bridge in the 2017/2018 season. Amongst the American contingent to have won the event over the last 20 years or so are Cory Kruseman, Tony Elliott, Davey Ray, Kevin Swindell and Jerry Coons, while it was Rico Abreu who prevailed when the race was last held at Archerfield in 2016/217. If Macedo can successfully defend his title, he will join Ray and Tattersall as the only international competitors to have won the event on more than one occasion.

Having accumulated 31 Australian Championship wins, New South Wales has been the most successful state and, with both Smee and Brown amongst their representatives again this season, they certainly have every chance of adding to their tally, while others amongst the 11-strong NSW representation include Michael Stewart, Matt Geering and Troy Jenkins. In contrast, only four Victorians have ever won the event and the last of these came, quite remarkably, in the 1938/1939 season, presenting Travis Mills, Caleb Mills and Peter Ghent with the unenviable task of trying to break an 84-year drought.

Queensland hasn’t fared much better than Victoria when it comes to producing national Midget champions, with only four drivers having visited victory lane for a total of five wins overall, the last of which came courtesy of Jim Holden in the 1984/1985 season. However, the standard of local competition this season certainly suggests that the host state should have several contenders in the mix as the laps wind down on the championship feature race. Expatriate New Zealander Michael Kendall has been very much on-song in recent weeks, finishing runner-up behind Macedo and Smee in consecutive feature races to reaffirm his credentials as a championship threat. As a five-time New Zealand champion, there is no doubting his big race bona fides and, as one of only two Queenslanders in the field to have secured a podium finish in an Australian Championship feature race, he certainly seems the local most likely to challenge for the championship. However, there have been several others whose form this season warrants their consideration as title contenders and it will certainly be no surprise to see Charlie Brown, Rusty Whittaker, Scott Farmer, Brock Dean or Casey O’Connell fighting for a place on the podium. Brendan Palmer has finished second in this event previously, but a lack of racing this season has him at a distinct disadvantage, while Troy Ware is another who could potentially pose a threat but may also find himself hampered by a lack of laps.

The reality is, of course, that anything can happen, as we saw last weekend when six cars exited the Queensland Championship feature race on the opening lap, so any driver who secures a position in the championship final may well find themselves in a position to emerge as the Australia #1 if circumstances fall in their favour. Of course, securing a place in the final to ensure they have a shot at the title will be a significant challenge requiring a combination of speed, skill and luck across two hectic nights of qualifying that will showcase Midget racing at its very best.

Over 140 competitors will compete over the weekend, with support action on Friday night coming courtesy of Microsprints, Stockcars, Open A/Outlaw Sedans and Formula 500 Juniors, while the Saturday program will also feature Wingless Sprints, Formula 500s, Lightning Sprints and fireworks.

Embracing the opportunity to be a part of the Australian Championship program, Wingless Sprints have secured a terrific field of 30+ for round nine of the Boss Hogg’s Steakhouse Wingless Sprint Track Championship on Saturday night, with the locals no doubt desperate to reverse the trend of interstate drivers winning feature races. The last three rounds have all be won by drivers from south of the border and once again there are several NSW-based competitors in the field. This weekend it has fallen upon Jacob Jolley, Jacqui Salmon, Michael Butcher and Darryl Marshall to secure further success at the expense of their Queensland rivals, of whom Robert Mazzer has been the standout so far this season with two feature race wins. Liam Atkinson also has clocked a feature win this season, while Ben Manson, Jayden O’Toole and Ben Manson have all finished on the podium on more than one occasion and are edging ever closer to a post-race stopover in victory lane.

In Formula 500 action, Tomas Partington will be chasing back-to-back feature race victories and, whilst Kaydon Iverson, Kurt Wilson, Brodie Davis and Blake Matthews are expected to provide strong resistance, Amanda Chaffey is fresh from a fourth-place finish in the New South Wales Championship last weekend in Tamworth and a continuation of that form might just land her on the podium for the first time. With Brady Argles and Kacy-Lee Black having also performed well in Tamworth to finish inside the top eight, they should also be confident of a strong showing, which certainly sets the scene for some highly competitive heats and feature race.

Gates open at 3.00pm on both nights for online ticketholders, with general admission ticket sales from 4.00pm. Early racing is from 4.45pm and the main program gets underway at 6.00pm.