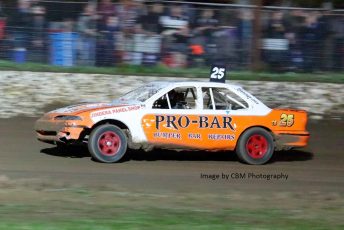 A season ending victory to Albury’s Daniel McCarten put a smile on his face after blowing his last engine to smithereens in April, McCarten was too strong in a great race with second and third trading places a number of times before the race settled down.

Wangaratta racer Nathan Shortis (# 55 Stickemon Signs – Commodore)had a great start to the show and it looked as if his rotten luck might just have turned after having a horrible run on the back of his last season’s Victoria number two achievement. Shortis won from Brendan Brewer, Chelsea Cornelius, Clint Henderson, Daniel Creek (# 35 PJN Sheds – Falcon), Scott Callander, Tom Barnard and Mick Quinn.

Dave Walton (# 42 Maverick Race Engines – Commodore) who had a great run at Wahgunyah in April and then another top run at Leeton in May, started well leading from start to finish in the second qualifier.

Troy Frost (# 46 Autobarn Albury – Commodore) from Wangaratta copped the wrath of the steward when handed a black flag for a turn four incident that seen his car and others wrecked. This by no means casts the dispersion that Frost was the cause of the incident, just highlighting that in the steward’s mind, Frost deserved a penalty.

Henderson led each and every lap in the third heat race with firstly Cornelius and then McCarten in the second spot. Eight lap later and Henderson had the win from McCarten, Cornelius, Brewer, Jack Bear (# 19 Neil’s Parts – Commodore) and Atkin.

Making it two all the way wins for the evening, Walton won the fourth heat race once again ahead of Maclean the former Victorian Champion. Creek, Shortis, Barnard (# 69 North East Bearings – Commodore) and Callander rounded out the finishers with Balins and Schmetzer not crossing the finish line.

Creek was another to take an all the way win in the fifth qualifying race ahead of Walton who once again finished ahead of Maclean. Brewer (# 16 Bicknell Signs – Commodore) and Barnard rounded out the field.

Henderson (# 1 Corowa Kitchens & Cabinets – Commodore) with his powered LS1 powered VE Commodore has fast become the best suited car to Wahgunyah Speedway, however the handling of the big beast makes it difficult in the turns for the driver. Henderson did well to lead the first seven laps in the final qualifier before McCarten pipped him on the last lap to take the last qualifying race win. Henderson finished in second ahead of Shortis, Cornelius (# 76 Cornelius Prestige Panels – Commodore), Callander and Bear.

Balins was unable to start the final with fuel and electrical issues leaving him to put his car on the trailer during the heat races.
Twelve laps awaited the finalists with McCarten jumping to the front of the field on lap one with Maclean, Henderson, Gordon (# 92 Gasweld – Commodore), Walton, Creek, Shortis, Cornelius, Brewer, Frost, Barnard and Bear in tow.

From fourth to second, Walton made passes on Henderson then Maclean on lap four before Maclean (# 7 Dunkley Paint and Panels – Commodore) took second place for one lap on lap six. Walton kept his grasp on second whilst McCarten out front kept steady.

On lap ten, Maclean whizzed past Walton and into second a lap after Creek had passed Henderson to move into fourth. McCarten continued on to take the win over Maclean, Walton, Creek, Henderson, Cornelius, Shortis, Brewer, Barnard, Frost and Bear.

McCarten was delighted. “Last time I raced here I was handing pieces of my pistons to the infield race announcer, I’m more than pleased with the win as this field gets tougher to win in. You never discount Maclean despite no longer holding that number one mantle. Walton’s car is good and Creek has had a couple strong finishes to this season and is always competitive.”

The Goulburn Ovens Sedan Association has the Corowa – Rutherglen end of season awards and their own Association awards to hand out before calling it an end to the year.