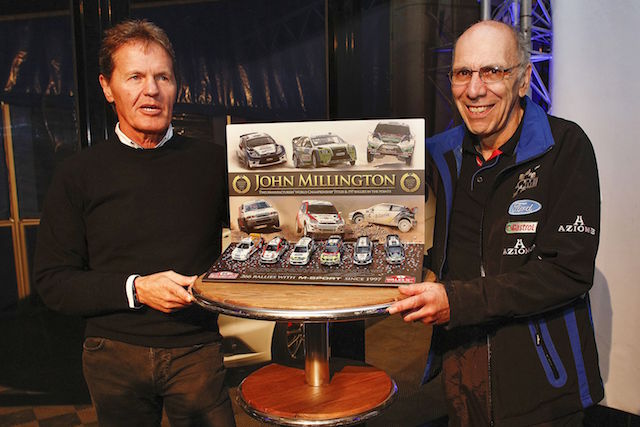 MEDIA RELEASE: After 18 full years of loyal service, John ‘Milly’ Millington is hanging up his radio and bidding a fond farewell to the FIA World Rally Championship (WRC). Having attended 317 rallies – 266 of which with M-Sport – the team wish him a very happy and relaxing retirement.

‘Milly’ started his WRC career as a celebrated navigator and mechanic – contesting his first WRC event at the 1982 Acropolis Rally whilst reading the notes for Jeff Fielding. In 1986, he had his first taste of co-ordinating alongside semi-works operation RED and never looked back – progressing to join Ford’s factory team at Boreham.

When M-Sport secured the Ford contract towards the end of 1996, ‘Milly’ was a must and Malcolm Wilson swiftly contracted him to the team. Since then, M-Sport’s logistics manager hasn’t missed a single event – 18 years and 266 rallies of dedication at the helm.

What was your first FIA World Rally Championship event?

The first rally I actually competed on was the Acropolis Rally in 1982. I navigated for Jeff Fielding in a Mk II Escort. We retired half way through leg two with a broken front suspension. The chase car was Roger Clark and Frank Rowlands who came to meet us with a new front strut. Frank fitted the strut while Roger showed me how to open a bottle of beer with the door catch of a Mk II Escort. We opened the beers while Frank fitted the strut.

How long have you been with M-Sport?

I’ve been with M-Sport since they secured the Ford contract at the end of 1996, but I also used to work with Malcolm when he ran the Michelin Pilot Escort in the British Rally Championship.

How did you first meet Malcolm?

I met Malcolm when we were both competing on road rallies. I came to Cumbria to do a rally with Ron Beecroft as a practice for another event we were going to do later in the year. We started as car three or four on the road and Malcolm arrived in a tired-looking Mk I Escort – having just won a local rough stage rally. That’s when I first saw him.

How did you join the M-Sport team?

I was working for Ford at Boreham. As soon as I realised the contract was being moved, I rang Malcolm and asked him for an interview. To this day it’s the only day other than my wedding day that I’ve worn a suit!

Have you ever missed a WRC event since being with M-Sport?

I’ve not missed a single WRC event. After Wales Rally GB that will be 266 events.

What has been your career highlight?

Definitely winning the manufacturers’ championship in 2006 – as a Ford man through and through that was something very special. The only downside was that we were in New Zealand so the whole team couldn’t be there to celebrate with us.

What is the most interesting place you’ve visited as part of the FIA World Rally Championship?

The most interesting places have to be China and Japan. I had two visits to China and it was so different and you had to completely change your way of thinking and working. Japan never failed to surprise me. It was so technically advanced with a real contrast of cultures. To this day I’ve never experienced anything like it.

What was the worst place you’ve visited?

Nowhere has been particularly bad, but certain parts of Indonesia and Nairobi could be a little scary. At the time, you felt as though you were just around the corner from conflict. You always felt a little uneasy and unsafe, even if you were in a group. It was a really funny concept because the girls felt totally safe there, but none of the boys ever did.

What will you miss the most?

The people – the rallies come and go, but it’s the people who make a lasting impression. It is said that there are no friends in motorsport, but I would disagree with that because I feel as though I have made a lot of friends who I hope to keep in touch with.

Anything you won’t miss?

There are certain aspects that I don’t particularly want to repeat and top of the list would be the bus ride back from Turkey closely followed by the RORO boat being delayed in Jordan! As big of an adventure as it was, it’s that part of the job that I won’t miss.

Who is the best driver you’ve worked with?

The ones you remember most are the characters – the ones who do the crazy things – and if you look at it that way it has to be Henning Solberg. I’ve been lucky enough to work with a lot of very impressive drivers over the years and no one really sticks out, but I was always particularly impressed with Carlos [Sainz]. His professionalism was so ahead of his time. Nowadays all of the drivers are professional athletes, but you didn’t get that years ago – apart from Carlos.

Co-drivers are close to my heart and the one that I will always remember is Tiziano Siviero. He was brilliant. The information and the detail you got back from him was fantastic and he had a work ethic like no other. He was such a quiet man, and you wouldn’t see that side of him unless you worked with him. To be fair, there are very few co-drivers that I haven’t got along well with. They are all exceptionally good at what they do – much better than I ever was!

The rest of my life. My two step daughters are taking me to Las Vegas in May and there are a couple of long distance walks that I would like to do – the Coast2Coast in the UK and also a rather lovely walk in northern Italy that Mrs Wilson has told me about. Apart from that, I’ve got nothing planned. All I’ve done for the past 20 years is plan, so now it’s time for me not to do any of the planning. When I get home from Wales Rally GB I’ll be asking my wife Pauline what she has planned.