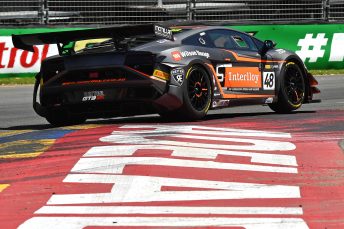 The M-Motorsport Interlloy/First Security #48 Lamborghini will return to the CAMS Australian Endurance Championship this weekend at Highlands Motorsport Park in New Zealand, looking to take their strong sprint series form into the 501-kilometre event.

Team-boss Justin McMillan will again share driving duties with fellow Victorian Glen Wood as they press home their strong Australian GT sprint series success from 2017, a season which has given the team victory in Townsville with Glen Wood coming through to top the round in the iconic black and orange Gallardo R-EX GT3.

“I love Highlands,” Justin McMillan confirmed. “Like the Bathurst 12-Hour, it’s one of those events that is a ‘must-do’ every year, and I have been to every one of the end-of-season Highlands events since the very first one back in 2013 and I’ve had a bit of a love-hate relationship with the circuit since then.”

Sadly for McMillan – his Highlands debut – in his very first season of Australian GT, ended in qualifying with a fairly innocuous spin in qualifying which put him into the barriers under the bridge, an accident which whilst appearing minor, actually cost he and team-mate Dale Wood a start in the first event, but just 12-months later McMillan and regular co-driver Steven Richards recorded a third-placed finish in the Interlloy Lamborghini.

2015 saw the stunning matte-black and orange Interlloy Gallardo take centre-stage once more, but for all the wrong reasons, a big fuel fire during a compulsory pit stop bring the team’s run to an early finish whilst McMillan was holding down a position just outside the top ten ahead of a final stop to hand the car to team-mate Dale Wood.

That led to the final event of 2016, a season which had started strongly with a podium finish at the popular Clipsal 500 event recording yet another podium finish for the team. Running strongly with the leaders throughout the 101-lap event, McMillan and Glen Wood crossed the line sixth, the first Lamborghini home and still on the lead lap.

For 2017, Glen Wood and McMillan will again be reunited, the pair having enjoyed some level of success in the Interlloy KTM X-Bow GT4 at the Bathurst 12-Hour, the pair part of a four-man crew that led the GT4 category comfortably up until the 10-hour mark, when a freak electrical failure cost them almost certain victory.

Whilst having limited laps in the Gallardo this season, McMillan has plenty of Highlands miles to call on, but Wood comes in hot, having claimed an impressive first outright win for the M-Motorsport team on the streets of Townsville back in July, but both drivers admit, they’re looking forward to getting back behind the wheel of the mighty Extenso..

“I can’t wait,” Wood admitted. “It’s been a great year with Justin and M-Motorsport, I can’t thank the team and our great supporters Interlloy and First Security enough. Bathurst was a great experience for me with the KTM, an experience which led to a one-off drive in Beijing for China GT, then of course Peter Major and I had a great run at Phillip Island during the first round of the Endurance Championship before a technical failure.

“We showed last year in New Zealand that we had a car capable of running with the leaders, and I hope that we’ll have that chance again this time around as we’d like nothing more than to close out the season with a strong result as just reward for everyone in the team.”

To keep up to date with the M-Motorsport team from Highlands, details of the team’s progress will be posted on; https://www.facebook.com/MMotorsportGT3