Lynton back with new car for APC attack

Lynton back with new car for APC attack 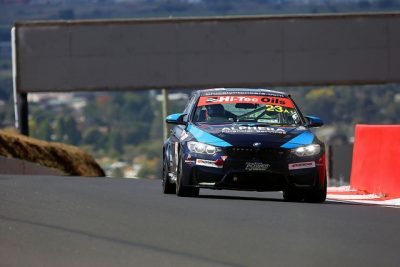 While that debut was challenging, Lynton says the focus is now on being as competitive as possible at the APC season opener at Sandown Raceway next month (May 11-13).

“We learnt a lot about the car at the recent Hi-Tec Oils Bathurst 6 Hour – we found some of its weaknesses and discovered that more development and reliability is required,” Lynton explained.

“The car shut down on (co-driver) Tim Leahey during the race after having done so in practice with myself at the wheel and we don’t know why. Then we were leading with 20 minutes to go and lost a wheel – the whole team was pretty gutted, but it is time to learn from it and move on and switch our focus to Sandown.

“As past champions, we get asked a lot as to whether reclaiming that is on our minds – this year it is not our primary focus as we want to develop the car, but if we do that job well, the success that should follow will bring us the championship.

“Not all of the tracks on the APC calendar will suit the car, but that is the challenge and the beauty of this series, and hopefully we can get some race wins and have a good time while getting the car where it needs to be.”

Lynton will contest the quartet of one-hour races at Sandown Raceway in a solo capacity before being joined by Leahy for future rounds of the season which mandate a co-driver.

“Sandown is a horsepower track, so it will suit the BMWs and also the Holdens – we saw how quick Jim Pollicina’s Commodore was before it caught fire a few years back for instance, it was pulling an easy 15 car lengths over my old BMW 1M down the back straight,” Lynton said.

“I believe there will be one or two now running in the NSW series that will be running with us in the Saturday races. The heavier cars are hard on brakes, so we will have to see how that goes.

“To walk away from Sandown with four wins would be good, but the car is still new and still being repaired after the Bathurst 6 Hour, as we wait on parts.

“The NSW competitors will also be an unknown to us, but I think it will be great to have a full grid for the APC at Sandown and I can’t wait to see how it all unfolds.”