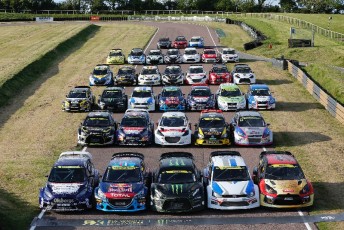 A record number of Supercars were lined up on Lydden Hill Race Circuit in Kent this evening ahead of tomorrow’s AUTOSPORT World RX of Great Britain, round two of the FIA World Rallycross Championship presented by Monster Energy. The spectacular line-up included a plethora of Supercars from various marques including Ford, Peugeot, Volkswagen and Citroen. An Audi A1 Supercar – the first of its kind to be seen in rallycross – and a Hyundai i20 Supercar also joined the mass gathering on the grid for the first time. Behind an impressive group of cars will be a star-studded line-up of drivers who represent 13 different countries. They include Petter Solberg, former WRC Champion, and winner of the season-opening World RX of Portugal which took place earlier this month.  One of the other front-runners will be four-times X Games medallist Liam Doran in his Monster-backed Citroen DS3 Supercar, as well as two-time Formula Drift Champion Tanner Foust, who will compete as a wildcard entry at Lydden Hill this weekend. Flying the flag for Britain will be reigning BTCC Champion Andrew Jordan, while Emil Ohman – a double World Champion in Snowcross – also joins the line-up.  Reigning rallycross champions from Europe including last year’s European Rallycross Champion, Timur Timerzyanov, Jerome Grosset-Janin (French Rallycross Champion), Julian Godfrey (British Rallycross Champion) and Peter Hedstrom (Swedish Rallycross Champion) are also present at Lydden Hill. The action gets underway on Saturday with two Supercar heats, followed by a further two heats on Sunday and the all-important semi-finals and finals.