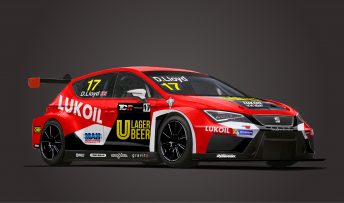 Lukoil Craft-Bamboo Racing will partner with the Singha Corporation, a leading Thai conglomerate that has steadily nurtured the local motorsport scene, for this weekend’s TCR International Series round in Buriram, Thailand. The team’s three SEAT Leons will be decorated with special individual liveries that reflect three famous Singha beers from Boon Rawd Brewery, Singha Light, U Beer and Leo Beer. This partnership will see Lukoil Craft-Bamboo Racing represent Singha throughout the Thai round, which marks the first of two races in Asia that begin to close out the 2017 season. The trio of drivers will be pushing hard to ensure that the Singha Beers are well represented on the podium at their home race in Thailand and in one of the most competitive international touring car championships in the world.

Each individual livery will feature prominent logo placement on the doors, bonnet and roof of each SEAT Leon TCR. Pepe Oriola in the #74 will be supported by Singha Light, while Daniel Lloyd will carry the U Beer logo on his #17 SEAT, followed by James Nash who will wear Leo Beer for the second year in a row in Thailand on his #54.

After a very successful collaboration in 2016 with Leo Beer, which saw a double victory for the team, Lukoil Craft-Bamboo Racing looks once again to further spread the popularity of these celebrated local beers. The team hopes to see the Thai fans cheering them on from a packed Buriram circuit this coming weekend.

With three rounds remaining in the 2017 fight for the championship title, Lukoil Craft-Bamboo Racing is currently second in the TCR International Series teams’ championship and needs just 33 points to close the gap to first place in Thailand. With 95 points up for grabs in the teams’ championship this weekend, they are focused on putting themselves in the lead before the series heads to Zhejiang for the penultimate round of the season.

“It is fantastic to have Singha on board with us as a partner for the Thailand round of the TCR International Series championship. Having the support of a legendary Thai brand is a great draw for the team and series and I hope that each of the three liveries are well loved by the Thai motorsport fans. Our aim is to bring the fans closer to TCR racing and we will be fighting to get Singha on the podium in both races and start the final leg of the season with great success.”