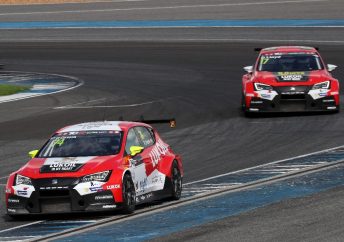 Lukoil Craft-Bamboo Racing endured a tough weekend in Buriram, Thailand, but put in a strong performance to score some championship points that have kept them in the running for the teams’ championship title in second place. Pepe Oriola was in fine form and showing good pace on the final lap of race one before a gearbox issue ruled him out for the rest of the weekend and shattered his chance of finishing in P2. James Nash put in an excellent qualifying lap to start second for race one before being forced to retire with a driveshaft failure, although the team did a fantastic job to get him back on the grid for race two where he was able to finish in P7. Daniel Lloyd fought his way into the points in race one, charging from P14 to P9 over the 14 lap race. The #17 driver did his all in race two but couldn’t quite find the same speed he had shown in race one, just finishing outside the top ten with P11. Lukoil Craft-Bamboo now looks ahead to Zhejiang for the penultimate round of the season to claw back some points in the teams’ standings before the final round in Abu Dhabi in November.

James Nash had a front row start from P2 and was quickly thrust into a battle for position, slipping into P4 as the cars completed the first lap of the race. Pepe Oriola had held onto his P6 grid position but was gaining ground on those ahead with some strong race pace right from the start. Daniel Lloyd had managed to gain two places over the first lap as he fought back from starting P14. By the fifth lap, Oriola had closed the gap and taken P5, overtaking Nash in the process who was now P6. Lloyd was also moving up the field, taking P11 to give him a shot at some championship points by the end of the race. Unfortunately, on lap seven, Nash’s driveshaft failed and forced him to retire, ruining his chances of a top ten finish and requiring the team to hastily make repairs on the #54. Oriola was absolutely charging up the field and made a great move to snatch P4 as the TCR cars began their eighth lap of the race. The #74 driver continued to close in on a podium position and caught third placed Attila Tassi halfway through the eighth lap. Now in P3 and with four laps remaining, Oriola knew he had a shot at challenging for the win, and the Spaniard soon took second place after Mat’o Homola suffered a burst tyre. Oriola was now within reach of the lead but as he closed the gap to less than three seconds, he suffered a gearbox failure on the final lap and had to retire the car. This was a massive blow to his championship campaign and prevented him from contesting the second race and scoring some very valuable championship points. Lloyd continued his march up the order, fighting his way up to P9 as he crossed the line for the final time, securing himself another TCR points finish.

James Nash lined up P9 on the start grid for race two and made a clean get away to claim P7 by the second lap. Daniel Lloyd was thrust straight into the mix from P14 and after getting up to speed made a clean overtake to settle into P13 by lap three. The Lukoil Craft-Bamboo pair managed to hold onto their positions until lap eight before Nash dropped down to P8 after an extensive battle with Dusan Borkovic in the Alfa Romeo. Lloyd was pushing his #17 SEAT Leon and over the course of the race had taken a further two places to slot into P11 by lap nine. With five laps left, Lloyd was fighting to break into the top ten but didn’t have the straight line speed to help close the gap. The #17 driver did well to bring the gap down to 1.7 seconds as he crossed the line for the final time in P11. Nash had been running confidently inside the top ten and had kept on the tail of Borkovic until the end of the race. With Norbert Michelisz suffering a mechanical issue on the final lap, Nash was able to bring the #54 SEAT Leon home in P7 to score some important points for the teams’ championship title fight.

“It was a very challenging weekend for the team, James did a hell of lap to get us onto the front row for race one but despite the one lap pace of the car being good, we still don’t have the straight line speed to race the other cars. I think it is clear to see that the BoP is not correct. Altoe is a good up and coming driver and a good rookie but he was trying to compete for points in the VW and in his first weekend in a Honda he is on the podium. I think it is time for the championship to move towards a circuit specific BoP. The failures that we had are very costly to our teams’ championship bid and it is hugely frustrating. James experienced a driveshaft failure on the Saturday but we had another failure during race one. Pepe had a gearbox failure in race one and we still don’t have the information to fully understand this yet. A hugely difficult weekend and with all the hard work put in by the team and drivers, they deserve more.”

“Overall I am pretty disappointed with the weekend, it is the worst pace I have had so far since joining the team, so it was a real struggle. I made a few places up in race one but we were struggling for straight line speed. Unfortunately, for race two it seemed like it got worse, so I just kept clean and stayed out of trouble but I couldn’t keep up with the other guys who kept pulling away from me. Massive thank you to the team for putting in the hard work in extreme conditions, so huge thanks to the guys for that as it is hugely appreciated.”

“Not the two races we had planned for sadly. Despite the driveshaft failure yesterday we managed to get the car onto the front row and we were confident that we’d have the pace to seize the initiative from the start. We’ve made cracking starts elsewhere but had no answer today when others drove past me. Thereafter we were working off-plan.”

“Another driveshaft failure side-lined me in race one at half-distance and later in race two I had to work very hard indeed to keep Huffy in the VW in particular behind me. Until we strip down the car and take a proper look we don’t know why we lost so much pace compared to race one but there has to be a reason because neither me nor the team came out all this way to make up the numbers, which is what we found ourselves doing today.”

“I am really sad and disappointed after the performance I showed in race one. Retiring at the end of race one when I was running in second after starting sixth was really difficult for me and the whole team. With a reasonable race two, we could have been in the championship fight in both the teams’ and the drivers’ championship. We will work hard to fight back at the next round in China.”