Luke Oldfield Does it Again

Luke Oldfield Does it Again 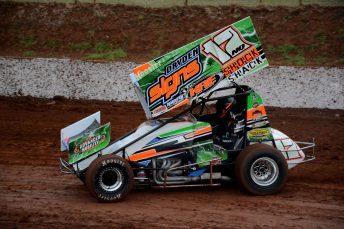 MEDIA RELEASE: Luke Oldfield continued his stellar season of success at Ausdeck Patios Archerfield Speedway on Saturday night (February) when he raced to victory in round eight of the East Coast Logistics Sprintcar Track Championship. Having started the 30-lap event from pole position after a dominant display through the various stages of qualifying, Oldfield trailed Andrew Scheuerle for much of the race before pouncing at a late-race restart to secure the lead. As the leading duo duked it out from the get-go, Peter Lack was lurking in third spot for the duration and whilst he was never close enough to make a serious bid for lead, nor was his position ever under any real threat. A mighty drive from Mitchell Gee saw him advance from position 13 to finish fourth ahead of Ben Hilder and Matt Butler, with David Whell, Callum Walker, Dylan Menz and Andre Liebke rounding out the top ten.

An impressive 34-car field hit the track for time trials and the night started as it ended; with Oldfield on top of the scoreboard. Having stopped the clock at 11.414, Oldfield was comfortably clear of surprise packet Menz (11.621), with Lack, Scheuerle, Whell and Walker next quickest. Lachlan McHugh, Mark Pholi, Brent Kratzmann and Hilder completed the top ten, with Butler impressing in his season debut to be next in line ahead of Anthony Vanderreyden.

Cody Maroske scored his first Sprintcar win when he paced the field in the opening heat, finishing ahead of Oldfield (who started 8th) and Kristy Bonsey. Vanderreyden suffered a setback when he smacked the turn two wall on the opening lap and exited, while McHugh’s night ended early when he rode out a wild wreck in turn three on lap four in an incident that also eliminated Andrew Corbet and Jayden Peacock from the race.

Oldfield stormed from the back of the inversion in heat four to pull off a sensational win over Brad Ayres and Titman, whose evaluation of the track as one-lane was debunked by Oldfield’s surge to the front.

Determined to demonstrate that he could match Oldfield’s every effort, Scheuerle also surged from the back of the inversion to win heat five ahead of Pholi and Hilder.

In the final heat of the night, it was Anthony Lambert who prevailed over Kratzmann and Liebke.

The C Main saw Andrew Corbet and Jayden Peacock secure the top two spots and a berth in the B Main, which was subsequently won by Rooks after Maroske spun himself out of the lead on lap 13. Liebke, Sauer and Rob Hamilton grabbed the remaining transfer spots into the feature.

Oldfield left his run to the very last lap of the Gold Shootout to secure pole position for the main event, to be joined on the front row by Scheuerle, with Lack and Walker sharing row two.

At the flailing of the green, Scheuerle shot to the front and he and Oldfield instantly set about distancing themselves from the field. As the race reached its mid-point, the leaders encountered heavy lapped traffic and, such was their advantage, it looked as though they might lap everybody except third-placed Lack until Hamilton stopped in turn one with eight laps remaining and triggered a restart. Two laps later, proceedings were interrupted again when Titman and Kratzmann tangled in turn four and it was from this restart that Oldfield was able to pounce and usurp Scheuerle from the prime position. Once in front, Oldfield went on to record his quickest lap of the race and skipped clear to finish 2.3 seconds clear of Scheuerle, with Lack unable to make any substantial gain through the closing laps. It was a dominant display from both Oldfield and Scheuerle that left their rivals floundering and there are a lot of teams with a lot of work to do if they are going to make much impression in the coming weeks.

Dirt Modifieds fronted with less than the 20 nominated entries and their numbers were reduced further when Garry Wathen found himself upside down whilst in possession of a the lead in heat two. With Lee McKinnell having won the opening heat ahead of David Clark and Kevin Stow, Wathen had established a substantial lead in heat two before being collected by a lapped car and sent hard into the turn one wall. Nick Stubbs inherited the lead and took the win over Ray Klarich and Andrew Pezzutti.

Klarich triumphed in heat three, leading McKinnell and Andrew Firth to the line before Mitchell Randall romped home to take heat four in advance of Chris Corbett and Pezzutti.

Just 14 cars fronted for the feature and it was McKinnell who shot to the front to lead through the opening laps. However, Pezzutti had quickly slipped into second spot and was using the cushion to great effect, roaring around the outside of McKinnell on lap 13 to assume the lead, with contact between the pair allowing Klarich to momentarily advance into second spot. McKinnell recovered quickly though and, after disposing of Klarich, he emulated Pezzutti’s use of the high line to regain the lead from the former national champ and charge top the chequer for an impressive win. Klarich consolidated third ahead of Clark, Firth and Chris Corbett, with Simon Blandford, Trevor Wiley, Nick Knott and Graeme Holland the only others to go the distance.

Tristan Johnson downed Ryan Skennar and Kristin Brown in the first of the Formula 500 heats, with national champ Liam Williams waltzing home ahead of Ryan McNamara and Tomas Partington in heat two.

Graham Williams did a good job to keep his titled namesake at bay in winning heat three, with McNamara third on this occasion, while the final heat went to Skennar over Brown and Upshall.

Skennar enjoyed a fleeting moment at the front of the feature race before Liam Williams surged into the lead through turn two on the opening lap and had skipped well clear of the field when the race ended early following a clash between Skennar and Brown as they battled for third spot, a tangle that prevented either driver from securing a place on the podium. McNamara clinched second spot ahead of Upshall and Graham Williams, with Piper Ogilvie finishing fifth ahead of Randy Morgan, Cameron Bertuch and Partington.

Wins in the Formula 500 Juniors were shared around with Nick Whell, Boyd Chaffey, Nick Hodges and Tarhlea Apelt all visiting victory lane.

Heat wins were shared between Wilson, Aaron Kelly and Peter Campbell, with neither Kelly nor Campbell going the distance in the feature.

The Ford vs Holden vs Sigma sedan feature went to Jason Walsh from Thomas Hunter and James Ivermee.

Next Saturday night (February 25) at Ausdeck Patios Archerfield Speedway will feature another big double header show with Super Sedans and Midgets on the program, plus AMCA Nationals, Compact Speedcars, Modlites and Open Sedans.