Luke Crowley: “Keep an eye out in Q1”

Luke Crowley: “Keep an eye out in Q1” 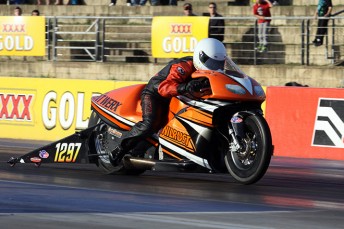 Current Pro Stock Motorcycle champ Luke Crowley has sounded an ominous warning as he plans to turn his bike up to 11 at the X-Champs in Sydney this weekend.

Crowley is confident his team has found an edge and could crack the 7.10 zone at Sydney Dragway.

“After a lot of homework I believe we have found the missing link that I’ve been overlooking for some time now with our current engine package,” he said.

“After finding a few things at the Southern Nationals we actually ran a PB mph down there and can’t wait to see if the next step will help get my bike to 60 foot as its currently the slowest bike in the field to that mark, but we have the power to be the quickest on most weekends.”

Last season Crowley says his goal was to remain consistent rather than fast but he ended up excelling in both areas on his way to a maiden championship.

“We started last year with a smaller engine (Black Betty) and honestly it’s my favourite engine. We ran as fast as 7.17 with Betty and even now I look back at the data and see what I missed and know it will be much faster when we bolt it back into the bike when its ready.”

His current Excalibur engine is 100cc larger and as per the rules, must carry an extra 36 lbs that has largely accounted for his struggles to get the bike to 60 foot with pace.

“I believe after hours of going over data from both engines we have found what it is to get the bike to get off the line as quick as the rest of them which should be at 1.06 seconds.”

“We’ve really only been in the 1.16 or worse, if we gain that tenth of a second in the first 60 it should in turn give us two tenths over the quarter.”

“As everything it’s in the clutch to make it happen and the clutch switch and how we set it. In sorting out this one small thing I expect my reaction times to get back to being consistently fast like I once was as the bike hasn’t been reacting as quick as it used too.”

“Unfortunately we wont have time to test prior to the X-Champs, so keep an eye out in Q1.”

The X-Champs commences at Sydney Dragway this Friday May 2 – Sunday May 4.