Luckless day for Bates at SMSP

Luckless day for Bates at SMSP 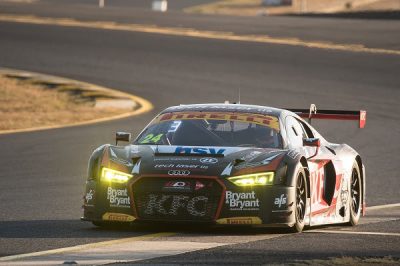 Tony Bates has salvaged a top 10 finish to round out a difficult weekend in Round 5 of the Australian GT Championship at Sydney Motorsport Park.

After his ninth place in Race 1, Bates didn’t even turn a lap in this morning’s second race, after the driveshaft in his KFC/Moveitnet/C-Tech Laser/B&B/Local Roadways Audi R8 failed on the formation lap.

Despite being placed at the rear of the grid for Race 3, Bates’ mandatory pit stop handicap time was not adjusted, due to his Race 2 DNS. The race was also shortened by 10 minutes, restricting Bates’ opportunities to gain positions, but he still worked his way up to ninth at the finish.

Bates said his focus has now turned to finishing the season on a high note, after his less-than-ideal weekend.

“After the elation of winning the previous round at Phillip Island, this weekend was very disappointing,” Bates said.

“The Race 2 DNF was particularly costly, and in Race 3 things just didn’t go my way.

“I was buried in the pack after my CPS and held up by slower cars at critical stages. Because the race was shortened, I ran out of time to overtake cars at the end.”

While Bates has fallen to sixth in the standings, he is still only 65 points off the lead with 320 points to play for in the final round at New Zealand’s Hampton Downs circuit.

“It wasn’t an ideal weekend but the good news is there’s plenty of time for us to regroup before the championship decider at Hampton Downs in October, and we’re still in with a shot at the title,” Bates concluded.