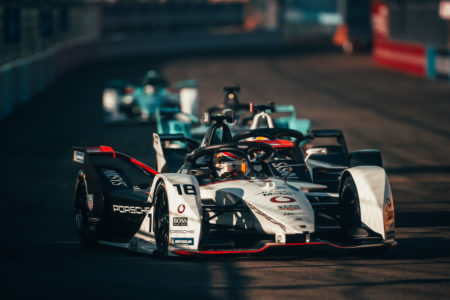 The TAG Heuer Porsche Formula E Team has continued the 2019/20 season with another top-ten result. At the seventh race of the ABB FIA Formula E Championship in Berlin (DE), André Lotterer (DE) crossed the line in ninth place in the #36 Porsche 99X Electric. After finishing second on the previous day, it was the fifth time this season that the 38-year-old has scored points in the drivers’ and team standings. His team-mate Neel Jani (CH) finished 15th in the #18 Porsche 99X Electric.

In the Drivers’ Championship, Lotterer is now in eighth position with 45 points. Having accumulated the same number of points after the first of three ‘double-headers’ at Berlin-Tempelhof, the TAG Heuer Porsche Formula E Team is also eighth in the overall standings.

The qualifying
Having reached Super Pole three times in a row, Lotterer missed out this time around. In the second start group, he recorded a time of 1:07.285 minutes to secure 12th place. Jani qualified in 20th position with a time of 1:07.640 minutes, but gained one grid position due to a penalty imposed on another driver.

The race
As had been the case in qualifying, the TAG Heuer Porsche Formula E Team drivers were confronted with grip conditions during the race that differed significantly from those on Wednesday. The early phase proceeded without any major events. Lotterer completed the first lap in 13th, while Jani remained in 19th place. The Porsche duo had switched to ‘Attack Mode’ when a full-course yellow neutralised the field just before the halfway point meaning that neither driver was able to take full advantage of the additional power. Nonetheless, both Lotterer and Jani continued to improve as the race progressed. The German driver moved into tenth in the final seconds before his second ‘Attack Mode’ expired and then secured ninth with a great overtaking manoeuvre just before the end. Jani worked his way up to 15th place.

Reactions to the Berlin E-Prix

Amiel Lindesay (Head of Operations Formula E): “That was a harder day for us. We were a little bit outside the window in qualifying and ended up in the middle of the field. During the race it’s hard work then. We are still learning but we managed to score points which is positive.”

Neel Jani (Porsche 99X Electric, #18): “I made a mistake in the first sector during qualifying, which meant that I had to start from a long way back. I was able to make up a few places but I struggled a bit with the handling as the race progressed. We will have to take a look at the reasons for that. The good thing is that we still have four races to go.”

André Lotterer (Porsche 99X Electric, #36): “I started from 12th and made it into the points. Of course, I would have preferred to have finished a bit higher up. If you look at our pace yesterday, it actually looked promising, but the car just didn’t feel quite as good today. However, we were able to gather plenty of data.”

Outlook
After the first ‘double-header’, drivers and team members can now rest and recuperate for a day. The season continues with races eight and nine on Saturday and Sunday. The TAG Heuer Porsche Formula E Team will be battling for more top results on the regular Formula E circuit in Berlin. The final two races will then take place on a new track layout on 12th and 13th August