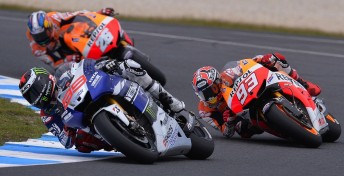 Two-time World Champion Jorge Lorenzo believes he can win the 2014 Australian Motorcycle Grand Prix, despite not tasting victory so far this season. Last year’s event winner is confident in his ability, particularly after dominating the 2013 race, which he describes as one of the most chaotic MotoGP™ races of his career.His incredibly talented countryman Marc Marquez has blitzed the 2014 season so far, winning 10 times, but Lorenzo claims that Australian Casey Stoner, a winner six times in succession, is the only person who is unbeatable at the Phillip Island Circuit.“I never won in MotoGP because Casey was so fast and so talented there, sliding around so quick and so constant that we couldn’t beat him. So finally I got my first victory in MotoGP in Phillip Island, and I was very glad,” Lorenzo said. “I won there in 2007 in my last year in 250s, probably my best race because I won by 20 seconds to the second rider.” Lorenzo’s premier-class career began the year after Stoner started his record-breaking run at Phillip Island, and although the Spaniard won in Australia in 2006 and 2007 in the 250cc class, Stoner’s affinity with the seaside circuit made adding to that success close to impossible until last year.Lorenzo said last year’s Australian race, where regulations forced riders to pit for a second bike fitted with new tyres midway through the race, was unlike anything he had experienced in his career. “It was unbelievable when we had this problem with the tyre and we knew we couldn’t finish the race with just one tyre,” Lorenzo said. “When we had to change the bikes in the pit lane from one slick tyre to another slick tyre, it’s never happened in history, so I thought this was very crazy. It was the only option and the best option, so I think they made a good decision.” In an interview with Keeping Track, the official podcast of the Australian Motorcycle Grand Prix, Lorenzo also spoke about falling just four points short of winning a third MotoGP™ title last year, his recent two-year contract extension with Yamaha, and the potential for Marquez to surpass the career achievements of nine-time World Champion Valentino Rossi. The next round of the 2014 FIM MotoGP World Championship will take place this weekend at Silverstone in the United Kingdom where Marquez will look to get back to his winning ways.Moto3 Championship leader, Australian Jack Miller, will also be in action this weekend along with fellow Australians Ant West (Moto2) and Broc Parkes (MotoGP).