Looking forward and looking back

Looking forward and looking back 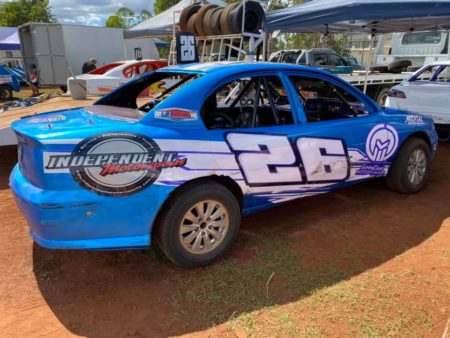 An extended off season is certainly not dampening the spirits of Gemma Laidlaw, as she works hard to build on last season’s performances heading into the 2020-21 season.

Laidlaw, from Churchill in the Central Gippsland of Victoria, is once again going to be doubling up this coming season in Production Sedans and Open Ladies Sedans and she is aiming to be a consistent podium contender across both classes.

Looking back over last season’s achievements, the second-generation racer was competitive in Production Sedans, after she finished fourth in the Victorian Title at Portland’s Southern 500 Speedway, placed second in the Noel McGrath Memorial at Wahgunyah Speedway and was running strongly in the Harbour City Hustle at Sydney’s Valvoline Raceway (NSW) up until a mechanical issue denied her of a top-10 finish in the feature race. In the Open Ladies Sedans, she racked up a total of two feature-race wins – with one at Bairnsdale Speedway and the other at Alexandra Speedway.

Despite the coronavirus outbreak bringing the 2019-20 season to a premature end and delaying the commencement of the 2020-21 season, Laidlaw can’t wait to get back out on the track.

“The start of the season is a bit up in the air at the moment, but it (the season) is likely to start after Christmas,” explained the 22-year-old racer.

“Apart from actually hitting the track, the goals are to be a podium contender on any given night in both Production Sedans and Open Ladies Sedans, and I’m quietly confident that I’m going to be able to do that.”

When it comes to next season, Laidlaw is planning to contest as many major Production Sedan events, such as National Title at Kingaroy Speedway in Queensland and the Victorian Title at Mildura’s Timmis Speedway, as possible, as well as competing in Open Ladies Sedans events around her Production Sedan commitments.

“My family has a rich history in Production Sedans, and I’m determined to do my very best to continue the family legacy,” said the Vic # 26 Gippsland Motor Group / Independent Motorsports supported VY Holden Commodore racer.

“Heading into every season, I plan to be better than I was the previous season, and this season is no different. I can take a lot of positives away from many of last season’s performances and I’m confident that I can build on that this coming season.”

Laidlaw plans to make her 2020-21 season debut over the Christmas-New Year period at Wahgunyah Speedway on the Victorian side of the Victorian-NSW border for the Noel McGrath Memorial in Production Sedans on the Saturday night of December 28. After a second-place finish in last season’s event, she is hoping to go one better this time around and start her season on a winning note.

Special thanks go to Laidlaw’s mum and dad (Lee and Stephen), along with her Uncle Phil, Uncle Robert, and Cory Horter.

To find out more about Laidlaw and her team, LIKE them on Facebook by searching Gemma Laidlaw Racing.