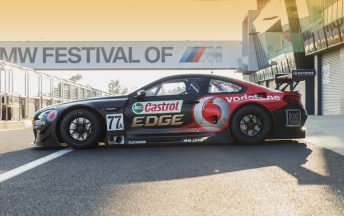 MEDIA RELEASE: Another piece of the sponsorship puzzle for Tony Longhurst’s BMW M6 GT3 Bathurst 12-hour entry has been put in place with the Halifax Vogel Group (HVG) becoming a part of the high-profile program through its Alucobond brand.

HVG will be represented at the Bathurst 12 Hour Endurance race on February 5 with Alucobond signage on the factory-supported BMW M6 GT3 of Longhurst, Mark Skaife, Russell Ingall and German ex-F1 driver Timo Glock.

Alucobond, an aluminium composite material for building façade cladding is manufactured in southern Germany by 3A Composites and is exclusively distributed in Australia by HVG division Alucobond Architectural.

A genuine chance of outright victory in the race in their Steve Richards Racing-prepared BMW, Longhurst, Skaife and Ingall have 10 Bathurst 1000 victories between them.

Longhurst is also a previous winner of the Bathurst 12 Hour in 2009. Longhurst and Skaife are coming out of retirement for the event, whilst Ingall has been co-driving in Supercars endurance events in 2016.

Glock is a BMW-contracted driver, having driven in Formula 1 for Jordan, Toyota, Virgin and Marussia scoring two second place results during his career.

The M6 will carry major branding from Castrol, Vodafone and BMW, while Alucobond, The Boat Works, Riviera Boats, Stefan Boating World and Club Marine are all support partners.

Longhurst, who owns the car, is a long-time user of Alucobond on many projects starting with his home on the Gold Coast in 2003 and most recently on a new retail showroom at his Boat Works business at Coomera.

Longhurst carried Alucobond branding on his helmet at Bathurst in 2003 when he finished fifth with Jim Richards for the Holden Racing Team.

In a further extension of the relationship, the team’s BMW M6 GT3 has been wrapped by Signzone in Melbourne with 3M vinyls supplied by HVG division, HVG Graphics Media.

More Alucobond info can be found at www.alucobond.com.au

WHAT THEY HAVE TO SAY…

“BMW and Alucobond are a great brand fit,” said Rayment.

“Both are high quality, high performance German manufactured products and we are looking forward to being a part of the Bathurst 12-hour which has really developed into one of the world’s great endurance events.

“Tony (Longhurst) has used Alucobond with confidence on various projects for several years and we are proud to be supporting this effort, which we believe will be one of the great stories of the 12-hour event.”

“We are excited with the program we have built for this year’s 12-hour and we are delighted to have HVG and the Alucobond brand with us for the journey,” said Longhurst.

“Every element of this team is about quality and Alucobond is a perfect fit. Alucobond looks great on the car beside BMW, Castrol and Vodafone.

“Bruce Rayment and his team at HVG and Alucobond have built a first-class reputation in the industry and we look forward to having them at Mt Panorama with us for what will be a terrific week.”