Bairnsdale based Limited Sportsman speedway racer Trent Wilson and his team made the long haul over to Mount Gambier recently to compete in the second of two state championships the drivers have the honour of competing in and although being confident he was a front running driver after recent track records at Bairnsdale Speedway; he was ecstatic to come away with a third-place podium finish surrounded by the best competition in the class.

Three qualifying races had its ups and downs for Wilson as a front of the field start in his first finished with him down in the results as the likes of the Victorian Champion Jock Baker, Katelyn Worthy and Travis Mathews finished ahead of him whilst his own lap times were good enough for fourth fastest in the qualifier. An issue here was a penalty for Wilson for perceived starting infringements where a three- spot d 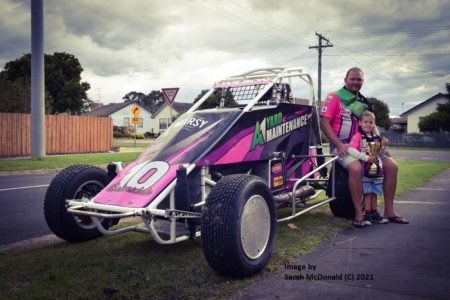 emotion was imposed. Evidence suggests the green light somehow was beating the wave of the green flag and perhaps Wilson might have been hard done by.

In the second qualifier Wilson proved to be the second fastest as he got around Borderline Speedway with mate Troy Curran finishing with the win. Bayley Wilson (No relation), Craig Ansell and then Wilson himself were the top four as the Bairnsdale driver moved from seventh to fourth.

From pole position in the third and final qualifier Wilson set a scorching pace setting the fastest ten lap time for the class of the evening, his time 2:50.147 for the distance. Wilson’s best one lap time was good enough for fifth fastest during the qualifiers.

Starting the twenty lap South Australian title race from fifth behind Horsham’s Curran, Baker and Hamilton’s Andrew Wilson and another Horsham racer Mathews, Wilson moved to fourth by lap four. It took until lap eighteen to move from fourth into third as he got past the current Victoria two driver Andrew Wilson and hit the finish line behind Curran and Baker in third spot less than a second behind the winner.

Speedway Media caught up with Wilson after the event. “We are absolutely thrilled with the result for our team and for the class in Bairnsdale in general. Firstly, my team in the pits and out there in the crowd all play a part in our weekends racing and I thank them all for their support. I would not want to do racing any other way. All of us race drivers from Bairnsdale are working hard to re-invigorate the class in our area and down further and this podium, in a way is our podium together. Thanks to Mark Both and Darren Adams in particular for their support in what I do and what we are doing locally.” Shared Wilson.

With the race season for Wilson finished and the class looking light starting next season with a dozen cars in Gippsland Wilson also wanted to encourage others to get to work on cars now. “Through social media people can find Myself, Mark, or Darren or if they know where we work, they can hit us up there. We are only too pleased to steer people into the right direction to get their car or to get a new car on track and ready. We are currently speaking to tracks right through Gippsland to try and organise race dates for next season, so if you live in Pakenham and want to join us, we are confident we will have tracks keen down that way.”

Trent would also like to personally recognise Sarah McDonald for her Photography and recognise Wayne Meer whom to all was known as Meersy and passed away this year. After years of travelling together and never getting on a state title podium, this one is for Meersy.