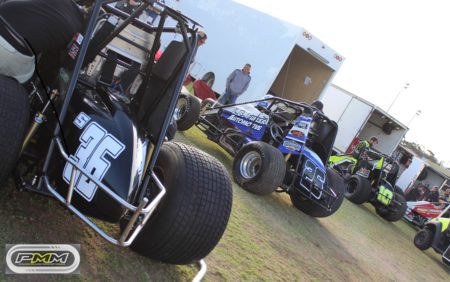 Following a record-breaking opening night late last month for the Wingless Sprints the nomination list has increased with the field exceeding 30 nominations for this Saturday night’s Wingless Sprints of SA event at the Murray Machining and Sheds Murray Bridge Speedway. With 32 drivers indicating they will be racing this weekend the crowd on hand are set be entertained with six action packed heats prior to what will effectively be two main events, with the possibility of a 16 car B-Main prior to the 20-car final.

After winning the season opener in a new track record Mount Gambier’s Kirby Hillyer returns along with fellow South-East resident Mitch Broome, who recorded a top five after starting on the front row. Going on their early season form they will be hard to beat but Ryan Alexander and Matthew Kennedy, both of whom were impressive on night one will again be their major rivals. Alexander returns to Wingless action having made his Sprintcar debut a fortnight ago.

Youngster Rylan Furler was another who started the season with great speed and isn’t far away from an A-Main victory while Anthony Tapley will be keen to make up for a disappointing opening night after battling his way into the final via the B-Main.

The race for “Rookie of the Year” will continue with the likes of Jenna Kervers, James Rodda and Kirra-Lee Pitcher back for their second night of competition while Sprintcar driver Chris James and former Speedcar driver Darryl Knuckey making their debuts.