Local lights lead the way in the BTCC

Local lights lead the way in the BTCC 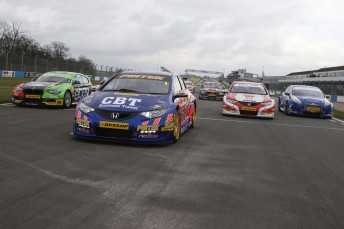 The Dunlop MSA British Touring Car Championship visits Donington Park over the Easter weekend (19/20 April) with a festival of speed and sound set to ‘rock’ the Leicestershire venue.

The on-track action is perfectly poised as local lights Andrew Jordan and Matt Neal currently head the record 31-car entry after performing impressively at the Brands Hatch season opener. With a line-up that includes seven former champions and a further half dozen race winners, however, the charge for glory at Donington Park will be as enthralling and unpredictable as ever.

It’s not just the BTCC’s crop of international star drivers and 14 flame-spitting models of car that will have the crowd on its feet, as a whole host of support races plus two top class music concerts will be adding even more speed and sound to proceedings.

With tens of thousands of fans expected to arrive from Leicestershire, Derbyshire and much further afield, Donington Park will be bursting at the seams with festive atmosphere and action.

Story so far: Campaign gets off to a flyer
The opening BTCC event of 2014 proved to be incredibly close with just one second covering the first 23 cars in qualifying at Brands Hatch.

The ultra competitiveness of the series didn’t stop the usual suspects from topping the timesheets during the weekend, however, as reigning champion Andrew Jordan scooped pole position before claiming back-to-back wins in his Pirtek Racing Honda Civic.

Colin Turkington proved victorious in the final showdown as he hauled his eBay Motors BMW 125i M Sport past his two team-mates and into an early lead that he would hold until the chequered flag fell. Last year’s other title protagonists also featured highly, with Matt Neal, Jason Plato and Gordon Shedden all tasting champagne over the course of the event.

It was a different story for returning champions Fabrizio Giovanardi and Alain Menu, however, although the latter did produce a stunning drive in his VW CC to take fifth in race three from 16th on the grid.

Away from the stories of the seven champions, it was multiple BTCC race winner Rob Collard who produced a front-running return to form with a hat-trick of top six finishes.

Adam Morgan lies seventh in the overall standings after an impressive debut for the WIX Racing Mercedes A-Class – the first three-pointed star machine to appear in the BTCC since 1986.

Talking point: Festival of speed and sound
Donington Park is offering some fantastic entertainment away from the race action during its Dunlop MSA British Touring Car Championship weekend, which looks set to bring the crowds pouring into the legendary venue.

An ‘Official BTCC Drivers Party’ on Saturday evening in the circuit’s Exhibition Centre will be headlined by the indie-rock band Scouting for Girls. A host of BTCC drivers have already confirmed their attendance, although as it’s on the eve of a huge race day it’s unlikely they’ll be partying as hard as the thousands of spectators!

Sunday evening may be a different story, however, as the ‘Official BTCC Afterparty’ kicks off in the same venue at the conclusion of the expected action-packed trio of tin-top races around the 1.96 mile circuit.

Platinum-selling artists Toploader and Reef will enjoy equal billing on Sunday night, bringing down the curtain on an unforgettable weekend.

Local heroes: Jordan and Neal homing in
Lichfield’s Andrew Jordan is riding the crest of a wave after fending off four former champions to win his maiden BTCC title last year. It was an incredible feat for the 24-year-old and he’s already out to prove his success wasn’t just a one-off.

Despite going up against rivals with vastly more experience, Jordan is quickly proving to be the man to beat again in 2014. He stormed to pole position at Brands Hatch, after pipping legend Jason Plato by just 0.012s. Despite Plato putting him under enormous pressure in the first race, Jordan held on to take the win.

It was a similar story in race two – this time Jordan had to defend from the challenge of 2012 champion Gordon Shedden. With success ballast on the car, Jordan failed to trouble the top ten in the final contest, but his points return was enough to top the standings at this early stage of the season.

“It was a good weekend at the office at Brands Hatch,” said champ Jordan. “Now I can’t wait for Donington! I love it there – it’s a classic circuit that’s really fast and flowing, plus of course it’s my home event. The people there are doing a great job improving the circuit and the fans love it too. If I was watching I would park myself on a deckchair down at the Craner Curves as it’s simply like no other place in the country.”

It’s a local weekend for Jordan’s Pirtek Racing team too, with the squad also based at Lichfield, whilst team-mate Martin Depper is from Birmingham.

Birmingham-born Matt Neal has such an incredible and uncanny affiliation with his local circuit that he’ll be going all out to produce the goods in front of his home crowd again next weekend.

“I have a lot of special memories of Donington Park,” he said. “It was where I took my first BTCC win, which really set me on my way, plus of course it’s my local circuit. It always attracts huge numbers of fans who all create a great atmosphere, and the racing always seems to be good too! It’s a circuit like no other to be honest, with very different characteristics, so I’m really looking forward to the weekend.”

Neal’s Donington CV includes becoming the first independent winner of a modern era BTCC race when he stormed to victory there in 1999, which earned him £250,000 in prize money. Last year Neal reached his 500th BTCC milestone race at the venue, and the Droitwich Spa-based racer remains the most experienced driver in the history of the series.