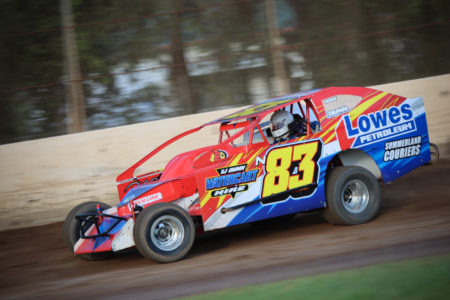 After starting the feature race from outside the front row, the Grafton-based Dunn paced the field throughout the 15-lap event in impressive fashion, which included recording the fastest lap of the race, and the 21-year-old racer went on to greet the chequered flag as the winner for the first time in his short career.

Following Dunn home in second was the pre-race meeting favourite Mitchell Randall, who had started from position four and tried hard to deny Dunn of the win but fell narrowly short in doing so.

Completing the podium in third was local Andrew Firth. After qualifying on pole position, he was unable to convert it into a win and had to settle for the final spot on the podium. Chris Corbett finished just off the podium in fourth ahead of Phil McNamara, the highest placed Sportsman competitor Brock Gardiner, Darryl Armfield, Mick Reid and Taylah Firth.

Earlier in the night, the heat-race action for the V8 Dirt Modifieds saw Randall and Andrew Firth share the wins.

In the support classes, Russ Hardy emerged triumphant in the AMCA Nationals feature race ahead of local Tony Blanch and Russ’s son Matt Hardy, Gavin Wade proved too strong in the RSA Street Stockers feature race and was joined on the podium by Brendan Hayes and Adrian Williams, the Production Sedans feature race went the way of Daniel Bridge by outpacing Ash Graham and Zac Macdonald, and Dave Putsey emerged the RSA Four Cylinder Sedans feature-race winner after he had defeated Justin Partridge and Wally Rudder. In the two Junior Sedan categories, Ryley Smith won in the RSA category ahead of the Putsey brothers Luke and Brody, while in the SSA category, Jacob Waller took out the feature race and defeated Zac Brims and Sophie Santin.

It was a great start to the 2021-22 season for Grafton Speedway, with a solid crowd and a good roll up of competitors for each class on show.

The next race meeting for Grafton Speedway is going to be on the Saturday night of November 27, which is set to be a massive night of action and sees the return of the 900 horsepower Sprintcars.

Grafton Speedway would like to thank Hessions Auto Parts for their support throughout the 2021-22 season. Based in Grafton, along with their new store location in nearby Coffs Harbour, Hessions Auto Parts stock a wide range of parts and accessories at competitive prices. To find out more about Hessions Auto Parts, you can contact them on 0266 423 085 (Grafton) and 0256 456 361 (Coffs Harbour) or visit their website at www.hessionsautoparts.com.au.