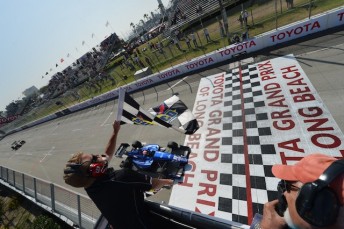 MEDIA RELEASE: Indy Lights – Four events into Carlin’s first season in the US and the team’s Indy Lights squad have enjoyed every twist and turn of the new journey.

Having long wanted to race on the IndyCar package, the decision to take part in the Indy Lights Series presented by Cooper Tires became an easy one for Carlin with the introduction of a new car and engine package. So far the team’s leap across the pond has proven to be a positive one and with six podiums including three wins recorded in the opening four events, Team Principal Trevor Carlin is delighted to have started the US programme so competitively.

“The team have done a great job adapting to a new environment and they’ve done so in a very calm and professional way”, says Carlin.

“To be honest it seems like we’ve been there for years in the way the team operates. We kind of made a conscious decision to do things the same as we do in Europe.

“Obviously there’s some small organisational differences which means we have to adapt to a few things, but the basic operation of the team is identical to any of our teams in Europe.”

The smooth transition to the US has been somewhat aided by working with drivers already familiar to the team, although the desire to work with new drivers and more from the US is a key ambition.

“So far we’ve taken two known quantities so to speak with us to the US. Max has already performed at a high level and Ed was doing a fantastic job in F3 last year before his accident, and despite not being sure how he would bounce back from that injury he’s excelled.”

Jones and Chilton have proven to be a strong combination for the team despite their inexperience on Indy Lights circuits, having claimed six podiums so far between them, including three consecutive race wins for Jones in the opening rounds of the season.

“We’re very much an international team though and we’re running three American drivers this year in other championships, so it would be great to run an American driver in Indy Lights at some point either this season or next.”

The culture and passion for motorsport in the US has been one of the most positive revelations for the team, with the Indy Car package attracting over 1.4 million fans in 2014, the team have found the Indy Lights paddock to be an enthusiastic and open base for race weekends so far this season.

“It’s quite refreshing; it’s not dissimilar to a World Series by Renault paddock which is very open and welcoming. Because the paddock is open to the public you get a real buzz between the fans and the teams.

“Obviously the big pull is IndyCar, but the grandstands are full, the autograph sessions are well attended and generally there’s a lot of interaction which is really nice.”

Racing in the support series to the IndyCar package at some of North America’s classic road, street and oval tracks, has only strengthened the desire to race in the top line formula.

“We’ve made no secret of the fact that IndyCar is the aim and that’s the main target, but we like to walk before we can run and the new IL-15 gave us the opportunity to learn at a junior level. But of course because of the early success we’ve had in Indy Lights we’re really chomping at the bit now to get into IndyCar, even though we know that is a much tougher challenge.”

As the only team from outside the Americas, the Carlin team have been a new face and unknown quantity for many in the Indy Lights paddock. Nevertheless, Carlin says the reception as a new team has generally been a positive one.

“To be honest, we’ve tried to join in and be part of the paddock. Some teams have been extremely welcoming and some teams have kept their distance. Obviously we do somethings a bit differently but at the end of the day we’re all there doing our best. We respect all the teams as competitors and hope they respect us as competitors too.”

“Dan Anderson has been very supportive of our entry into Indy Lights and I think it’s been positive for both sides – for us as a European team in the US and for the series to be opened up to maybe a slightly wider market and also I think having Max involved has lifted the profile of the series.”

Although the team have enjoyed a strong start to the season, Carlin isn’t underestimating the challenge ahead.

“We’ve had a good start to the year and we would never have dreamt we could win the first three races of the season.

But the competition is very strong and I think it’s going to get harder and harder throughout the season. The Ovals in particular will be a challenge for us – it’s just something we or the drivers have never experienced before.”

Despite the challenges that still lie ahead in 2015, the team are already planning beyond season one.

“The aim for 2016? We’ve already had quite a bit of interest from new people for Indy Lights in 2016 which is really encouraging so we hope to be in a position to expand the team to three cars and if the climate and conditions are correct we’d like to move into Indy Car and we’re having discussions to that effect.”