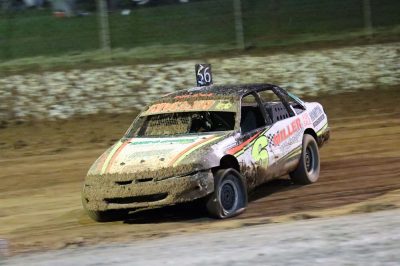 Pakenham based race driver Brendan ‘Little Show’ Miller has taken out a huge Speedway win on the weekend (June 23rd) when he was able to battle with his good mate Matt Nelson coming away with victory in the Bob Hickson Memorial.

Earlier in the race Darren Nelson looked impossible to defeat before succumbing to race car damage limping across the line on the lead lap in ninth place, other wins in the final Nyora event of the season went to Jake Young in Crash and Bash, Courtney Meakins in National Juniors and Damon Ingram in Standard Saloon Juniors.

The Bob Hickson Memorial began with forty plus entries and two heats per competitor to determine their starting spot in the fifty lap feature race or the last chance qualifier with a mixture of race cars in the Open Sedan format pitting Late Model chassis cars up against Modified Sedans of varying types.

Peter Cox picked up the first win in qualifying and the car he drove looked very settled and quick, the eventual winner Miller picked up a win in heat two, Dale Morrison and Dale Hallett took the final two wins in round one.

In round two Leigh Bourke, Darren Nelson, in blistering one lap speed on the tight little bullring of 16.928, David Donegan and Frank Ramsdale won the qualifiers. Dylan Campton, Kayla Knox, Daniel Angus and Broderick Stray transferred from the last chance qualifier into the main event after they crossed the line first to fourth.

The feature event always is filled with a little bit of drama, there is heartbreak for drivers doing well, there is crashes and steward interventions, there is great racing in and out of backmarkers in the field and is the elation of victory.

During the fifty-lap feature Darren Nelson got away to a blistering pace and put some distance between himself and second until he caught traffic and had to calmly and gently work his way around the competition. Dale Hallett was his initial chaser. Leigh Bourke a potential winner was the first major casualty of the race finishing infield with mechanical breakdown.

Then the first piece of drama as Hallett was deemed to have hit Nelson the leader causing him to spin, Hallett was directed to slide down to the back of the field. Soon after a crash put out three of the entrants with Knox, Campton and Andrew Dike who at full speed slammed into a stricken Campton all left the track with damage.

Miller and the race leader’s nephew Matt Nelson, Donegan, Jamie Paull, Frank Ramsdale, Hallett who had recovered from the rear of the field and Peter Cox were amongst others in great battles for the top five positions. Cox and Ramsdale were amongst the fastest Cox matching Nelson’s earlier 16.928 and Ramsdale recording a 16.976, whilst Darren Nelson went faster again in the final at 16.715.

Another drama during the race occurred when Nelson whilst in the lead went flying through the infield backwards before his car nudged a crew vehicle with its rear bar. Stewards deemed that the incident was caused by contact with another competitor and re-instated Nelson at the front of the field.

Nelson looked comfortable in the lead and was only caught as he made his way through traffic before escaping when the track was clear ahead. Eventually his car damage slowed him down and Miller, Matt Nelson, Donegan, Paull and Ramsdale all roared past to record top five finishes.

After the feature Miller was delighted as it has been a little while since a good feature win for him, he thanked Nyora Raceway for persisting whilst under the threat of rain and event cancellation, his crew, friends and family for their support and congratulated the rest of the podium.

In Crash and Bash racing some competitors elected to miss the first round of heats when the class was sent out onto a track that had been affected by rain and whilst it was drizzling. Shane Ardley was sensational in the conditions and won the first qualifier with Stephen Mitchell the second. One of the drivers to miss the first round was Jake Young and he won his first heat in round two with Mitchell picking up another. Young won his second heat in round three with Nathan Taylor picking up the final victory.

A thirty-lap final ended the night and sent the crowd away happy with a number of spins putting as the lead cars made their way through the field trying to avoid being spun themselves. Mitchell led the race for a considerable amount of time and for those that had not seen Mitchell win; their fingers were crossed for him to gain victory.

Alas though in turn four as the race was nearing its conclusion Mitchell opened the door for Young in turn four and Mitchell pushed high trying to exit and Young didn’t have to wait for a second invitation as he snuck through and went on to win from Mitchell, Rob Bushell, Shannon Mair and Anthony Segond.

In the National Juniors a great car count meant the field was split across four heats with each driver in three of them. Courtney Meakins and Ally Morrison both won two qualifiers each before the final race showdown. The racers in 1200 to 1500cc racecars depending on models are super quick and Meakins led the field as they whizzed past newer drivers a number of times. Meakins went on to win from Morrison, Courtney’s brother Rhys, Breanna Simpson and Linken Paterson.

In the Standard Saloon Juniors a first ever final race victory to Damon Ingram topped the night off with two fancied competitors unable to make the catch and pass, Ingram now is sure to mix with the leaders more often next season. Ingram won from Rhys Lansdown, Lewis Williams, Kasey Ingram and Nathayla Westwood.
Nyora Raceway is over for the season and racing will return in November.