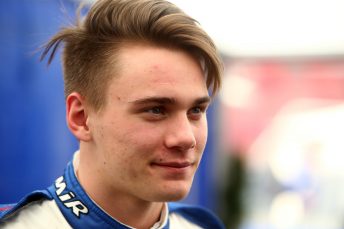 Double R Racing’s Swedish single-seater hot-shot Linus Lundqvist will be making the step up to the BRDC British Formula 3 Championship at Spa-Francorchamps next weekend (7/8 July).

Lundqvist is the reigning Formula STCC Nordic champion and Formula Renault 1.6 Northern European Zone champion. He made his British racing debut in British F4 this year, competing with Double R, and currently lies third in the title standings, with three wins.

The 17-year-old will now make his British F3 debut at the majestic Spa-Francorchamps circuit, home of the Belgian Grand Prix, following a limited test programme with the reigning champion team. He replaces Harry Hayek, who is recovering from a back injury sustained in testing, and will join Double R’s existing line-up of Jamie Chadwick and Guilherme Samaia for what is currently planned to be a one-off appearance.

Lundqvist said: “I am absolutely thrilled to be making my Formula 3 debut at Spa next weekend. It was not something I expected to be doing this year, and I really want to thank Double R Racing for putting their trust in me for this.

“I’ve never been to Spa before and it will obviously be difficult to go up against the F3 guys in the middle of the season, but I will do my best and try and learn as much as possible. I also wish Harry [Hayek] all the best in his continued recovery.”

Double R Racing team boss Anthony Hieatt said: “We’re all really excited to see how Linus adapts to F3 at Spa next weekend, it’s not going to be easy but he’s done an incredible job in British F4 this year with us and definitely deserves this opportunity to showcase what he can do at a higher level.

“His pace in British F4 has been nothing short of sensational this year, his tally of pole positions, fastest laps and race wins proves that, and I’m confident he’s going to grab this chance with both hands and give a very strong account of himself. Linus doesn’t know Spa and although it is a hugely challenging track, I’m sure he’ll be up to speed very quickly. We can’t wait for next weekend.”

The 2017 BRDC British Formula 3 Championship continues at Spa-Francorchamps in Belgium on 7-8 July.