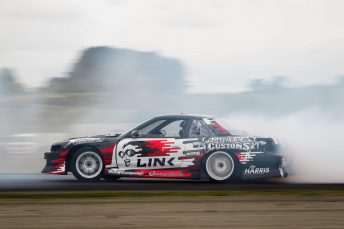 The country’s only recognised drifting series will be known as the Link ECU D1NZ National Drifting Championship from round one in Wellington onwards.

Last season the Christchurch company came on board as official partners of D1NZ’s live stream. 2018 will see Link ECU continue as the official supplier of ECUs for the series’ teams and drivers.

Link Engine Management CEO Andy Millard said taking their backing to the next level was a logical step for the organisation.

“Link ECU has had a long association with D1NZ over the years and it’s great to be able shift it up as principal sponsor of the 2018 D1NZ National Drifting Championship,” Millard said.

“D1NZ has always been the premier drifting competition here in New Zealand and we’re happy to throw our support behind this year’s series, particularly as the main event in the New Zealand Xtreme Motorsport Series.

“There’s no doubt it will be a a family motorsport extravaganza.”

While motorsport was the initial focus, Link ECU’s are used in performance cars, drag racing, jet skis, snowmobiles, aircraft, speedway, and jet-sprints in over 65 countries for over 25 years.

Link ECUs are a common staple in not only D1NZ, but around the world. Recently Link ECU came on board as primary sponsors for North America’s Formula DRIFT PRO2 Championship.

They are also primary backers of the Irish Drift Challenge and feature in the British Drifting Championship, Australian Drift Grand Prix and D1GP China.

“It’s cool to have a Kiwi owned company with such a strong international presence putting their support behind a Kiwi racing series,” White said.

“For the longest time Link ECU have had a strong presence in the drifting scene and it’s good to have continuity among the teams and drivers.

“We’re looking forward to what 2018 will bring and having Link ECU on the face of it all when we start in Wellington is going to be mega.”

Millard said he’s looking forward to another season of D1NZ as the level of competition steps up and their presence continues to play a big part.

“D1NZ has some of the best drift pilots in the world and by supporting D1NZ, Link ECU is ensuring these drivers and their teams have an opportunity to show Kiwi audiences their best.

“This year’s competition is the best line-up yet and the crowds are going to be treated to some world-class drift action.”

“It isn’t by accident that the best drifters in the world run Link ECU products, whether at D1NZ, IDC, BDC, Formula DRIFT, ADGP … the winners standing on the podium have Link ECUs under their hood.”

Round one of the Link ECU D1NZ National Drifting Championship will take place at Max Motors Wellington Family Speedway in Upper Hutt over January 12-13.