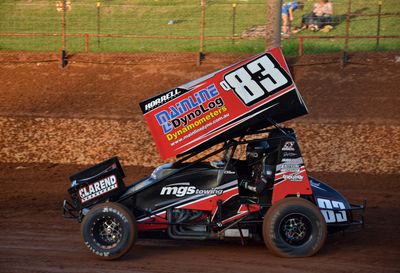 South Australia’s Steven Lines became only the fourth driver to win a round of the East Coast Logistics Sprintcar Track Championship this season when he withstood the late advances of series leader Luke Oldfield to prevail in round 11 at Archerfield Speedway on Saturday night (March 19). Having qualified on pole position for the 30-lap showdown, Lines skipped clear in the early going as Oldfield worked his way forward from the third row. Teenager Jy Corbet occupied second for much of the race and even dared to dream of bigger things when he edged ahead of Lines for the briefest of moments, only to find himself unable to fend off Oldfield as the laps wound down, ultimately finishing third in his best ever performance. Another South Australian in Brock Hallett finished in fourth spot, with Bryan Mann rounding out the first five in a return to something that is closing in on his best form.

In round eight of the TFH Midget Series, Brock Dean joined the growing list of feature race winners when he parked Lachlan Paulger’s Kenilworth Camping/ATG #37 in victory lane. In a race that proved every bit as exciting as the Sprintcar feature, Rusty Whittaker zoomed back into contention in the closing stages after leading early, falling short by a narrow margin, with Matt Jackson clinching third ahead of Casey O’Connell and Dylan Menz in a frantic finish.

Steve Potts pounced to take maximum advantage of the misfortunes of others in round eight of the Shock Absorber Therapy AMCA Nationals Track Championship, securing his fourth feature race win for the season. When the front-running pair of Bruce Marshall and newly crowned national champ Steve Price both struck trouble
just six laps from home, both Thomas Vickery and Kev Stow found themselves on the podium for the first time this season.

After a longer-than-expected break in competition due to the floods that swamped south-east Queensland, 28 Sprintcars fronted for time trial qualifying on a track that was in remarkably good shape considering it had been several metres underwater just a couple of weeks earlier. Just when it looked as though Oldfield was going to top the timesheets once again with a best lap of 11.592, Hallett had other ideas and stopped the clock at 11.534 to emerge with KRE Fast Time. Next quickest were Mann (11.597), Corbet (11.651), Ryan Newton (11.675) and Lines (11.761), with Aaron Kelly, Trent Vardy, Nicholas Whell and Randy Morgan the best of the rest.

The opening heat race was halted before it really began when a spin from Nelson Reddecliff in turn four left Hallet, Karl Hoffmans and Peter Campbell with nowhere to go. In only his fifth Sprintcar meeting, young Harry Stewart maintained his composure under pressure and delivered a stirring drive to keep Lines at bay and snare his first win of the season. Another rookie in Tarhlea Apelt finished in third, while Kelly suffered an early setback when his Raw Metals #7 stopped in turn four on lap five.

Taylor Prosser prevailed in heat two, with Oldfield charging from the back row to finish second ahead of Sam Bylsma.

Backing up in heat four, Lambert made no mistake on this occasion and secured the win in advance of Kelly and Oldfield.

Dan Murray downed Prosser and Kratzmann in taking out heat five before Lines snatched a last-gasp win in the final heat, relegating Mitch Gowland to runner-up on the final lap, with Karl Hoffmans home third.

As top qualifier from the preliminaries, fortune favoured Oldfield when he selected pole position for the Spanloc Dash, only for the inexplicable to unfold when he fell to sixth as Lines cruised home ahead of Mann, Corbet, Hallett and Newton.

The B Main was a straightforward affair with no changes amongst the top four as Darren Jensen led throughout to win over Trent Vardy, Adam Butler and Ryan McNamara, leaving Stewart to fall agonisingly short of a feature race start with a fifth-place finish. Further back, Brodie Boss was impressive in his maiden outing, advancing to eighth after starting at the rear of the field.

Lines leapt into the lead when the feature race launched, with Corbet immediately relegating Mann to third. A spin from Hoffmans in turn two on lap five bunched the field, with both Hallett and Oldfield having already usurped Mann. A moment from Newton in turn two on lap seven saw him drop several spots, with the race halted again on lap 10 when Lambert stopped in turn one. Lines continued to lead, despite the best efforts of Corbet, who was riding the ragged edge with an all-or-nothing approach so typical of someone so young, with Oldfield now third and looking strong. Oldfield soon found his way into second spot and, when Kratzmann spun in turn four with 10 laps remaining, Lines now found himself having to face down the man who has dominated the series thus far. Of course, as a two-time winner of the Grand Annual Classic, Lines is no stranger to such pressure and he was able to maintain his advantage to become the second interstater to score an ECL feature win this season. In finishing second, Oldfield extended his series lead, while a third-place finish for Corbet might just be a sign that even greater success is not too far away. Hallett and Mann completed the first five ahead of Randy Morgan, Titman, Prosser and Whell, with some late-race pace propelling Jensen into the top ten. Vardy and Newton were next in line to leave McNamara and Butler, both of whom have featured on the podium in this competition, as the final finishers.

Dan Moes downed Brad Keiler and Nicholas O’Keefe in the first of the Petzyo Development Sprintcar heats and then backed up to finish runner-up behind Libby Ellis in heat two, with O’Keefe third again.

The feature (C Main) proved an effortless stroll for Moes, who would go on to win by more than nine seconds, leading many to question how much more ‘development’ he could possibly need before the making the step up. Ellis occupied second spot until retreating to the infield on lap ten, gifting O’Keefe a runner-up finish ahead of Cameron King, Keiler and Jared Desmares.

The opening Midget heat race emulated the corresponding Sprintcar event with an incident in the first turn. In this instance it was a spin from Barry Gibbs in front of the field that left Charlie Brown with nowhere to go and resulted in both cars parked on the grass without any laps on the board. Elevated to the front row for the restart, Michael Kendall was untroubled in leading throughout to defeat Whittaker and O’Connell.

Dean downed Rob Stewart and Scott Farmer in heat two, with Kendall backing up to win again in heat three over Brown, who had to restart from the rear of the field after again finding himself the victim of a spun rival when Rob Stewart looped in turn two on lap four, with Glenn Prowse finishing in third spot.

Spins from Tony Stephen and Kody Stothard interrupted the final heat but had no bearing on the result with Dean always in control to score a second win. It was Menz and Brad Dawson who filled the minor placings on this occasion.

Having inherited pole position when Kendall, as top qualifier, selected position four in the pre-race draw, it was Whittaker who led the field away in the feature race. At the first restart on lap three following a spin from Drew Fenton, it was Whittaker over O’Connell, Dean, Kendall, Farmer, Jackson and Brown, who was putting on a heck of a show in his bid to climb up the order and continued his charge despite climbing the main straight wall on lap 10. Dean had advanced to second when the race was halted again following a spin from Stewart and it was soon after the resumption that he swept to the front. When Kendall tangled with the lapped car of Prowse on lap 17 and was required to restart from the rear, Brown found himself third ahead of Jackson, both of whom had rounded up Menz and O’Connell. However, another interruption just one lap later when Doyle upended again in turn one proved very costly for Brown when a couple of untidy moments saw him drop several spots as Whittaker closed in on Dean at the front. Any hopes Kendall held about salvaging a good result were dashed in spectacular fashion when he flipped out through turn three with as many laps remaining. Although both Whittaker and Jackson clocked their fastest laps in the charge to the chequer, Dean held firm at the front to secure his first feature win for the season. A frantic scramble behind the first three resulted in O’Connell emerging fourth at the flag, followed by Menz, Dawson and the luckless Brown, whose efforts deserved a better result. As the only other finishers, Bernie Clarke, Kody Stothard and Stephen rounded out the top ten. Having endured a wretched season thus far, Darren Vine was again in the wars, his feature race coming to a spectacular end when he flipped heavily on the main straight and came to rest under the chequered flag.

There was a sense of familiarity at the front of the field for most of the AMCA Nationals feature race with Steve Price, Bruce Marshall and Steve Potts – having all collected heat wins – occupying the top three spots respectively. However, on lap six, the complexion of the race changed dramatically when Marshall, who was closing in on Price in pursuit of the lead, made contact with a lapped car that triggered a restart. With Marshall banished to the rear by officials, Potts moved to second and was then handed the lead before racing resumed when Price, in his first outing since winning the Australian Championship in Mildura, was denied a celebratory homecoming when he headed infield. From here, Potts completed the remaining laps to collect his fourth Archerfield feature race success for the season. Thomas Vickery finished in second spot ahead of Kevin Stow, with Graeme Holland recovering from some early contact with the only other heat winner in Brett Robotham to secure fourth in advance of Scott Hitchcock and the recovering Marshall. Lucky seventh was Michael Denning, leaving Shane Stacey, Maverick Dack, Jay Allen and Mark Taylor as the remaining finishers.

Following heat wins to Richard Treanor and Matt O’Neill, it was the latter who cruised home to win the feature race. Andrew Parkes and Dave Collins filled the minor placings, with Treanor and Luke Williams the only finishers in a very small field.

Wayne Kirkman and Rodney Craft split the heats in Open/Outlaw Sedans, but with Craft not fronting for the feature, Kirkman romped home by more than 10 seconds. Colin Morris bested Les Eisenmenger in their battle for the minor placings, with Keith Craft and Brad White rounding out the top five.

Although it was Bailey Leeson and Charlie Bowen who shared the spoils in the heats with a win apiece, come feature race time it was Chay Corbett who found the winning edge, leading Bowen, Sean Rae, Brooke Wilson and Axel Rudolph.

The next meeting at Archerfield Speedway is on April 2 featuring round 12 of the East Coast Logistics Sprintcar Track Championship and round nine of the TFH Midget Series, plus Wingless Sprints, Formula 500s, Lightning Sprints and Formula 500 Juniors.