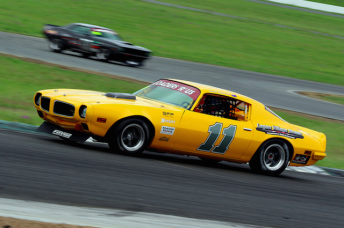 With a maximum 105 points available in both series across qualifying and the four races, fans were treated to action-packed racing throughout the field of thundering American muscle cars.

Adding to the family ties, the nephew of 2015 Australian Trans-Am champion Charlie O’Brien, former V8 Supercar Development Series driver Shannon O’Brien, came to terms with the championship winning 1970 Pontiac Firebird he will be driving in the 2016 series, while Charlie came to grips with the multiple-title winning 1972 Chevrolet Camaro he will be steering next year.

John English made his way past the O’Brien pairing to take his first race win in his 1970 Pontiac Firebird, taking the chequered flag ahead of Tenkate in his 1969 Ford Mustang and Palmer in the 1970 Plymouth AAR Cuda.

Sean English in his 1966 Ford Mustang finished ahead of Collins in his 1965 Ford Mustang in the 5.0-litre series, while Shannon O’Brien failed to finish his debut race in the category after a gearing issue.

English went back-to-back in race two to take a commanding win, ahead of Palmer and Shannon O’Brien, who swapped cars to the #72 Camaro driven by Charlie O’Brien in the previous race to drive from the rear of the grid to finish third.

Mike Collins was the sole 5.0-litre car to finish in a race where a number of key championship contenders failed to make it across the line with Tenkate experiencing fuel vapour problems, while Sean English’s 5.0-litre title hopes were damaged, after snapping the #44 Mustang’s left hand rear axle off at the spline on the diff.

Swapping cars again, Shannon O’Brien bettered his effort in the previous race, starting from the rear of the grid in the 1970 Pontiac Firebird to secure his maiden victory in the Australian Trans-Am series in race three, finishing ahead of John English and Charlie O’Brien on the Clubman circuit.

Simon Trapp was the best of the 5.0-litre series in his 1966 Ford Mustang with Tricia Chant finishing second in her 1968 Ford Mustang.

Shannon O’Brien capped off his debut round with a second race victory in a frantic wet, final race in which all cars ran on dry tyres before the mid-race deluge. O’Brien came home ahead of Ian Palmer, who secured third in the outright series standings over Anthony Tenkate as a result of his placing, and Charlie O’Brien. Simon Trapp, took his second race win in the 5.0-litre series for the round, but it wasn’t enough to stop Tricia Chant claiming her second 5.0-litre series round win.

Sean English was elated with his 5.0-litre series title win.

“I’m wrapped to win the 5.0-litre series, it has been great racing with Mike (Collins) and the championship went all the way down to the wire,” said English.

The first round of the 2016 Australian Trans-Am series will be at Lakeside Park on March 19 and 20.