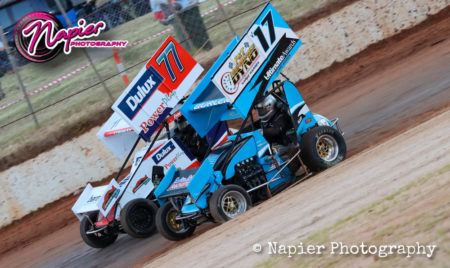 This Saturday night at Nyora Raceway, we finally get to see the running of the Australian Lightning Sprint national title that was scheduled to occur last year before Covid, and weather intervened. With the weather in the high twenties this weekend, there will be no such trouble crowning a national champion this weekend in the locally supported R & K Alignment and Exhaust Australian Lightning Sprint title, the fortieth such time the title will have been run under one name or another.

This marks the first time the title will be run in Victoria with the Victorian Club in recent years having aligned with the national Lightning Sprints body. Ten campaigners from New South Wales, three from Queensland and four local competitors will compete this Saturday with all cars still running after the heats, able to start the feature event.

Defending champion AJ McTaggart leads the field of nominations that includes a handful of New South Wales competitors that have competed already at Nyora Raceway with the Victorians. Danny Stone, Harley Graham and Pete Styles have competed on this week’s venue, a small elbows up bullring that has a unique upwards front straight and downwards back straight layout.

Michael Conway from the local Victorian contingent won at Nyora this year already lapping the venue on that occasion in the low fourteen second bracket. Committee members of the Victorian club Andrew Burleigh, Maureen Sell and Ally Moore will all be behind the wheel of their race cars keen on all cars finishing, with a Victorian in a podium position.

Some of the local contingent of racers in Victoria for one reason or another have not been able to nominate this weekend, one such racer is event sponsor Rahmon Rivero. Rahmon runs the Kyabram based, R & K Alignments and Exhaust business. Rivero and his wife Karen have been undertaking exhaust fabrication and mechanical Repairs and Servicing since from R & K since 2018. A mechanic with 32 years of experience, R & K specialise in front end repairs, wheel alignments, custom exhaust fabrication, bolt on exhaust systems for cars and 4×4, suspension upgrades and custom headers for racing applications.

Maureen Sell the President of the Victorian club is proud of her committee’s efforts in putting together the title event. She shared, “We have all pitched in with responsibilities behind the scenes to make this event memorable for those that are coming and competing. I usually do not like to single people out, however a special thanks to Ally for all her work assisting myself the President of the host club. Thank you to Rahmon and Karen for their unwavering support of the title financially. This means so very much to us Victorians. I hope all our friends from NSW and QLD have a wonderful time, and we wish them well with their personal goals this weekend.