Light at the End of the Tunnel for Alexandra Whitley

Light at the End of the Tunnel for Alexandra Whitley 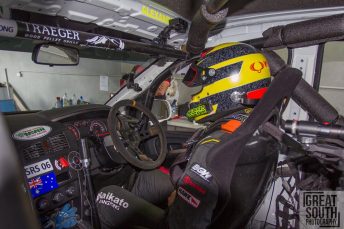 MEDIA RELEASE: It had been a long wait between rounds over the Christmas break, a month felt like 2 and I was itching to be back in the seat and go racing. It was the 3rd Round of the SsangYong Actyon Racing Series at Hampton Downs last weekend of the 28th and 29th of January. With a full field of utes the competition once again has stepped up.

I had taken myself testing the week before (even in the pouring rain) to make sure I had the edge on
the other drivers. The weekend started well, the sun was shining the track was fast and I qualified 7th with the top 10 drivers all within .6 of a second of each other. The racing was going to be tough; and tough racing it was. I got off to a rough start in race one being squeezed and pushed back to 11th place, I drove back to 6th position to join the three way battle for 4th. With only 2 turns to go I made a mistake and soon found myself barrelling towards the wall! I quickly gathered it back together and finished 13th place.

Race 2 was late in the afternoon, starting from 13th place I was avoiding crashing and spinning utes left right and centre, I felt like it was dodgem-cars but I couldn’t hit anyone! I made my way to 10th place where I stayed and finished the race. In Race 3 we made some mechanical changes to the ute to try and find our missing speed of the winners, I started 7th and finished 8th, this was the toughest race of the weekend for me as I battled with the handling of the ute the whole race and I was also penalised for hitting another ute which added 10 seconds to my finishing time.

The final race of the weekend I stared from grid 13. Our start was delayed so was sat on the grid until we eventually got underway. Staring this far back from the front is always tricky and once again I was squished from every direction from the start and even became the meat in a “Rollinson brother’s sandwich” causing a mirror to break completely off and the other to fold in. The boys never give an inch and we all raced our wheels off, making a late pass into the first turn set me up to take 11th place in the final race of the weekend and where I finished overall.

I cannot thank my sponsors, mechanic Greg and supporters enough for being there for me during the good times and the bad. I felt like I battled with the Waikato SsangYong Ute this weekend, so it’s back to the drawing board this week to get it all sorted. The best part is I get to go racing again this weekend in Taupo for Round four and while some weeks are harder than others, it’s such a great sport and this class has become so tough that when it does reward the rewards are even sweeter. I look forward to getting back to the front of the field as I can see the light at the end of the tunnel.