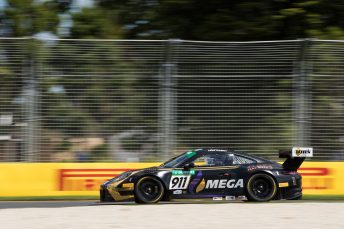 He was elevated to fourth when a post-race time penalty was applied to a competitor in front of him.

Starting seventh, Talbot edged his way through the opening lap and avoided some action that was taking place around him.

It was there he was able to settle down into his rhythm and test the overnight changes applied by the Walkinshaw GT3 team.

The car backed by Australia’s newest Petroleum company circulated to accumulate the most amount of points in the Amateur race – which held a higher points rating than yesterday’s Pro level affair.

Tomorrow, Talbot returns to Pro racing with race three over 25 minutes – which will take place at 12:05pm before the weekend comes to a conclusion on Sunday – where he is guaranteed a second row start after today’s fourth placing.

“Fourth is a fantastic result this morning, we just stayed out of trouble, did what we had to do off the start and then got some clean air. To go from seventh to fourth is a great result here.

“The MEGA Racing Porsche was consistent throughout the race. The changes that we applied overnight to the car worked. Our lap times improved today, which is testament to the hard work the Walkinshaw GT3 boys put in last night.

“Tomorrow, we just need to conserve in the second Pro race and then come Sunday, attack for the end of the weekend.

“We’re pretty happy with the car overall right now. Right throughout the field, tyres are the issue and who has conserved theirs the best. The Porsche is extremely good on tyres, we’ve got some great traction around here, you could say MEGA traction in fact!”