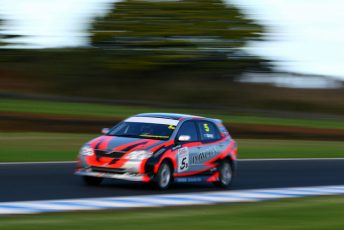 2016 APC Class E championship runner-up Ellexandra Best will advance to Class D at Winton Motor Raceway this weekend, and will do so as part of Lauren Gray Motorsport alongside Michael Gray.

Michael is the patriarch of the Gray family and heads up the LGM team with daughter Lauren Gray. Last year LGM fielded Best alongside 17-year-old Liam Thompson in a Toyota Echo which was in contention for the Class E title right to the end of the season.

While Thompson has now headed overseas to pursue other racing opportunities, Best – who turned 18 just last week – will return for another season with LGM and this time, in a class D Toyota Corolla.

“I am looking forward to having an experienced co-driver this year in Mick. His knowledge of the car will be beneficial as he knows the car better than anyone and this will be invaluable in sharpening my driving skills,” Best said.

“I am looking forward to moving up to Class D and driving the Corolla. After a recent test day, I am feeling quite comfortable in the car and am excited to see how it goes up against our competitors.

“I am thrilled to be driving at my home track at Winton Motor Raceway – our team’s main aim is to first finish the race and hopefully we can gain a podium finish, which would be a bonus.

“I’d like to say a huge thank you to everyone who has been supporting me over the years, my family, friends and the team at LGM. A huge shout out also has to go to my sponsors Best Leisure Industries, Beaurepaires Benalla, Benalla Sports Persons Trust, Burkes Signs Benalla and Daisy’s Garden Maintenance.”

Gray echoed Best’s statements, stating he has enjoyed watching her race craft grow over her first season with the team in 2016.

“After having Ellexandra debut in the APC with LGM last year and working alongside her, watching her grow and mature into a great young driver there was just no question – when the opportunity came up to drive with her I jumped at it. She has loads of experience and has done a lot of laps around Winton,” said Gray, who thanks Lauren Gray Motorsport, L2P Road Ready and Best Leisure Industries.

“We think the Corolla will be more suited to Winton then some other tracks, as it has tight, twisty corners which suits the smaller, more nimble, cars. It is possible we may lack a bit of straight line speed – that seems to be everybody’s excuse these days!” he laughed.

“At the end of the day we don’t have any huge expectations – we will just race to a plan and a strategy, stay out of trouble and bring the car home in one piece and hopefully without a scratch.”

Best and Gray will be joined on-track by the rest of the APC field at Winton Motor Raceway across June 9-11, with two 300km races to be held across the weekend. Track admission for all three days is free, and Sunday’s race action will be broadcast online live and free from 9.00am at thenationals.com.au