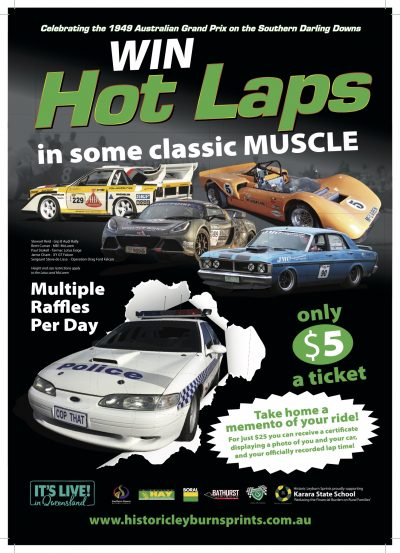 Can you imagine riding in a McLaren or Lotus sports car, an Audi quattro rally beast, an 820 horsepower Falcon GT or even an ex-police pursuit drag racer? Some lucky spectators are in for the experience of a lifetime as winners of an amazing competition at the Historic Leyburn Sprints next month.

Raffles to win passenger “hot laps” in these rare and exotic cars on the Leyburn 1.0-kilometre street course will be held throughout the 18-19 August Sprints weekend.

Sprints President Tricia Chant says the event’s traditional ride raffle has been upgraded into a major spectator attraction this year.

“For the price of a $5 ticket, we’re offering Sprints spectators the unique chance to ride in some truly incredible cars. I can’t think of another event in the country that offers an experience like this and I’d like to thank the drivers for making their cars available,” Mrs Chant said.

The raffles winners will ride at speed in the following cars –

Raffle tickets will be available from mobile sellers around the Sprints precinct and the merchandise tent, and multiple draws will be held throughout the weekend. Height and size restrictions apply to McLaren and Lotus passengers and all winners must be at least 15 years or older to ride.

The 23rdannual Historic Leyburn Sprints, celebrating the running of the 1949 Australian Grand Prix at Leyburn, has drawn around 210 historic, classic and performance cars for the two days of round-the-houses time trials. Other attractions will include a display of around 40 vintage caravans and, on Sunday only, the popular Shannons Show ‘n’ Shine for road cars and motorcycles of all descriptions.

Adult ticket prices are $20 per day or $30 for the weekend, with accompanied children under 14 admitted free. Competition starts at 8am each day.

The community-run Sprints is the CAMS Queensland motorsport event of the year and benefits local organisations and charities. It is supported by Tourism and Events Queensland’s Queensland Destination Events Program and the Southern Downs Regional Council.