Lewis Hamilton: ‘I never for a moment doubted or lost belief’

Lewis Hamilton: ‘I never for a moment doubted or lost belief’ 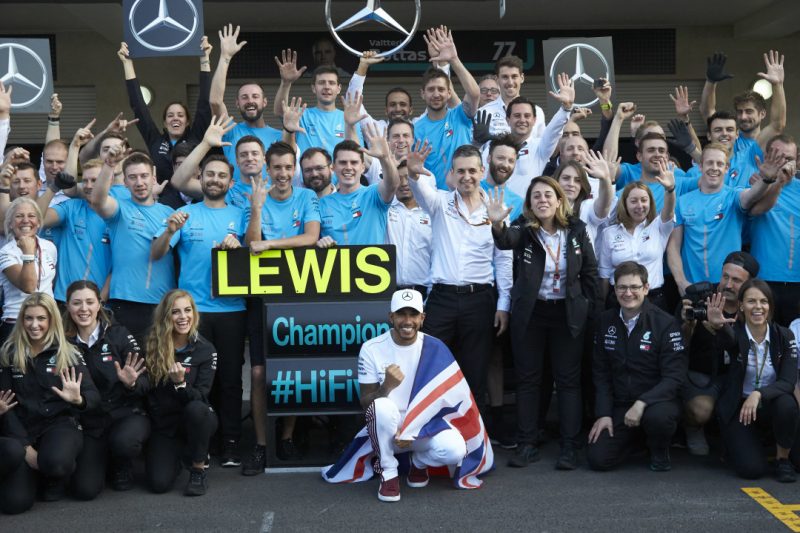 For the second year in succession, the Mexican Grand Prix was the race in which Lewis Hamilton wrapped up the Formula One World Championship. He and the team had to overcome some big challenges during the course of the season.

Stat-Attack – Mexican GP: Last weekend, the Formula 1 paddock was set up in Mexico for the 19th time. Since the country made its return to the racing calendar in 2015, Autodromo Hermanos Rodriguez has hosted four Grands Prix. Two of those races were won by a Mercedes driver (Nico Rosberg 2015, Lewis Hamilton 2016) and two by Red Bull driver Max Verstappen (2017, 2018). Lewis has actually had cause to celebrate two even more outstanding achievements in the Mexican Grand Prix, because it was the race in which he clinched the Drivers’ World Championship in both the 2017 and 2018 seasons. However, the current campaign still has some way to go: in the remaining two races in Brazil and Abu Dhabi, the team will be aiming to secure the Constructors’ Championship for the fifth time in a row.

An illustrious group: This fifth world title for Lewis puts him in among an elite group of racing drivers who have won the Formula 1 World Championship five times or more. In Mexico, he moved up to level pegging with the legendary Juan Manuel Fangio, who also won two of his five titles (1954 and 1955) with Mercedes. However, Lewis will need to claim a further two titles before he matches the achievement of record world championship winner Michael Schumacher. In one particular classification, he has already surpassed the seven-time World Champion: Lewis tops the pole position leaderboard on 81. He still has some way to go in terms of race victories (Schumacher 91 – Lewis 71), podiums (Schumacher 155 – Lewis 132) and fastest laps (Schumacher 77 – Lewis 41).

Mercedes-AMG celebrates championships in the Intercontinental GT Challenge: Tristan Vautier (FRA) clinched the overall drivers’ championship of the Intercontinental GT Challenge in the final race of the season at Laguna Seca. Ably assisted by team-mates Maximilian Buhk and Maro Engel (both GER), the Frenchman driving the number 175 Mercedes-AMG GT3 entered by SunEnergy1 Racing took third place in the eight-hour race, which was enough for him to secure the 2018 drivers’ title. Level with Vautier at the top of the leaderboard going into the race had been Raffaele Marciello (ITA). Partnered by Maximilian Götz (GER) and Lewis Williamson (GBR) in the number 43 Mercedes-AMG GT3 entered by STRAKKA Racing, Marciello finished seventh, which meant that he came third overall in the 2018 championship. Another driver with cause for celebration was Kenny Habul (AUS). The number 75 SunEnergy1 Racing Mercedes-AMG GT3 which the Australian shares with Mikaël Grenier (CAN) and Luca Stolz (GER) was involved in an accident early on in the race, but after extensive repair work, the car was able to complete the minimum number of laps for classification, which was enough for Habul to finish top of the 2018 Bronze class. In the manufacturers’ championship, Mercedes-AMG took second place. Felipe Fraga (BRA), David Fumanelli (ITA) and Nick Leventis (GBR) claimed victory in the Pro-Am class at the wheel of the number 42 Mercedes-AMG GT3 entered by STRAKKA Racing. Second place went to the number 63 DXDT Racing car driven by David Askew (USA), Ryan Dalziel (GBR) and Mike Hedlund (USA). Jeff Mosing, Tim Probert and Justin Piscitell (all USA) in the number 65 Murillo Racing Mercedes-AMG GT4 finished third in class to secure yet another GT4 podium finish.

Lewis, you did it – you are World Champion for the fifth time, and for the fourth time with this team.
Lewis Hamilton: I think it is going to take some time to really digest everything that has happened. I am just really proud. After the race, I was with the engineers, and we all had a drink together. It was so great to see them all. Everyone is so united, everyone has worked so hard this year, and everyone has raised their game. I just want to be the best me I can for them. I truly believe I am only a chink in the chain, because there are so many of us. Without every single individual, it just doesn’t happen. The chain wouldn’t move. I am just proud that I was able to deliver in my space. It has been a long journey with them. I have been in this team for six years now. From day one, the day that I decided to join this team, I truly believed that something great was possible. Look what we have achieved together. Now we need to complete the job this year by winning the constructors’ championship.

How difficult was it to hold your own against the strong competition this year?
Lewis Hamilton: People watching only ever see the tip of the iceberg. When you see someone successful on TV, it’s obviously without a full description what they have done to get to where they are. You just see the success that they are having now. To perform this way this year – trust me – it has been the hardest season for me. To keep raising the bar and racing against a four-time World Champion in a really incredible team who were so fast this year – most of the time faster than us – and to have pulled together as a team and turned it around has been a real collective effort from everyone. So I am really proud of everyone. Honestly, I never stopped believing – that’s just how I am wired. I truly believed from the beginning of the year, even when we had difficult races such as Shanghai or Montreal. I never for a moment doubted or lost belief in this team, in my guys or in myself.

How have you spent the time since your title win on Sunday?
Lewis Hamilton: I got back to Los Angeles, where my dogs were. I worked nonstop and had meetings all day on Monday. But I had dinner with a bunch of friends to celebrate. In general, I just feel content. I don’t need anything. I just want to enjoy and harness the feeling and try to realise what it is that I have done. Because to me, it was just another day of racing which I am really grateful for. When you think of Fangio, who is for me the godfather of racing drivers, he had five World Championships, and now I have five as well. But it doesn’t connect at the moment. It doesn’t feel real, but I am humbled and grateful to all the people around me, because there have been a lot of them along the journey.