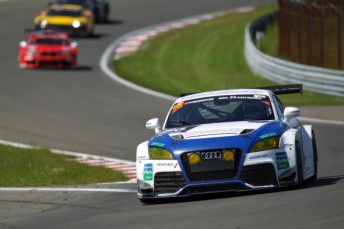 Fredrik Lestrup scored his second win of the year when he and Besaplast Racing finished first in the SP2 class and sixth overall with the Audi TT-RS in the 12 hour race at Zandvoort.

The race starting with a three hour part on Friday and followed up with a nine hour part on Saturday was action filled with many incidents on the narrow circuit at the beaches of Zandvoort.

The team was fourth in class and 14th overall after Friday due to some mechanical problems during the later part of the Friday race.

Re-starting on Saturday morning the team steadily climbed through the field and in the end finished first in class, six laps ahead of the second placed car in the class.

“This was the first 12-hour race at Zandvoort and the organization was very good with great work from the marshals,” Fredrik says.

“There was a lot of incidents during the race and lapping cars was tricky with a lot of cars and a narrow track. We deliberately started cautiously and avoided getting into any incidents.

“Unfortunately we had a small mechanical issue early in the race that cost us some time but other than that a faultless race. I’m happy with the result and our second victory of the year and as always great fun driving the Audi and once again big thanks to Besaplast for another opportunity with them.

“This was a good warm-up for the legendary 24-hour race at Nürburgring in a few weeks.”