Leitch makes his mark at US F4 debut in Miami

Leitch makes his mark at US F4 debut in Miami 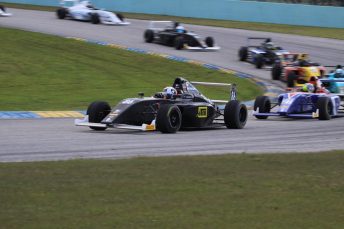 New Zealander Brendon Leitch had plenty to learn during his first event in the Formula 4 United States Championship at the Homestead-Miami Speedway over the weekend, but the Toyota Racing Series regular showed strong pace and has many positives to build on for the remaining five rounds.

Leitch only got into his Formula 4 race car for the first time on Friday, 7 April, while most of the other 33 entrants had already done a couple of days’ testing.

“For a start on Friday’s first practice, we had to run the gearbox in and make sure the car was good to push,” says Leitch. “From there the team and I just made our way through the steps, improving all the time before qualifying at Saturday lunchtime. The majority of the front runners in this field are quite quick and good to race with and the Homestead-Miami road course, as they call the track, is very exciting as you also get to run around part of the main oval. You get up to some good speeds there and there are lots of opportunity to pass!”

By the practice session on Saturday morning, Leitch says they were constantly improving the car but it still felt a little bit off. The New Zealander qualified 13th during the 30-minute qualifying session and also damaged two tyres, which left him just one full set of tyres for the rest of his weekend. “I didn’t qualify where I would have liked, but considering it’s the first weekend in the car to be in the top third of the field was a good achievement I think.” But with penalties imposed on two faster qualifiers, Leitch moved up to start the first race from 11th.

Leitch says both Saturday afternoon’s and Sunday morning’s 30-minute races were a bit of a struggle. “We lacked some straight-line speed and, with the ‘full course cautions’, i.e. safety car periods, was pleased to be able to battle with drivers around me.” He managed to hang on to finish 11th and 12th in the first two races.

Setting the third quickest lap time in race two and following a penalty imposed on the second-quickest driver, Kyle Kirkwood, Leitch started race three on the front row. “That fixed our problem with the straight-line speed as I could get a good start and made my way into the lead.”

Leitch pulled away from the field but after three laps, struggled with the tyres. “Everyone else had new tyres for that race, so to hold on and eventually finish 12th was still pretty good.”

Of his first experience in the Formula 4 United States Championship, he says: “I think overall we will have some very impressive pace heading into the next round at Indy so I’m very excited about the potential. To have been to Indy previously will also help. There was a bit to get used to with the way the races were run, especially the full course cautions instead of safety car periods or red flags, as there was a few in each race which certainly compresses the field.”

Team manager Orton was pleased with how Leitch performed for his first race outside New Zealand, considering the challenges he and the team overcame at this first round.

“Brendon drove the car for the first time Friday morning while most other competitors in the 33-strong field had two days’ testing,” says Orton. “Our car was brand new and had never been driven, so running the gearbox in lost us some time but that was our only option considering how close to this first event the whole deal was put together. Then damaging two front tyres in qualifying left us with one set of tyres for the three races which cost us the last race. Brendon was so strong in that race, but with everyone else starting on new tyres, he did his absolute best to hold on for 12th. There was also an issue with the rev limiter sending a false signal to the shift lights which meant our car ran 500 RPM less than everyone, so with that in mind Brendon did bloody well!”

Looking ahead to round two in June Indianapolis Motor Speedway, Orton says: “The team has a lot to do before Indy and we will do a day or two testing in Dallas beforehand, which will be a great help.”