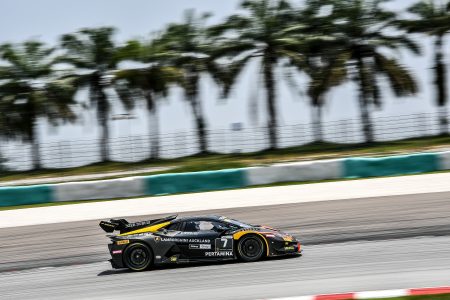 New Zealand racing driver Brendon Leitch enjoyed a solid debut in Asia over the weekend, despite undertaking a busy programme racing in both a Lamborghini Huracán and an F3 single seater.

Leitch’s incredible weekend at the Sepang circuit in Malaysia saw him compete in both the Formula 3 Asian Championship and in the 2019 Lamborghini Super Trofeo Asia, where the Invercargill racer will complete the full season representing the Giltrap Group and Lamborghini Auckland.

“It was a pretty crazy weekend for me to be honest,” explained the Invercargill racer. “Nevertheless it was very enjoyable. It was an interesting challenge jumping from one car to another and to very different machines. It’s also difficult in a field of identical cars like the Lamborghini Trofeo to find an advantage.

“I focussed on trying to understand what the strengths and weaknesses of the cars and drivers around me were and finding the right way and the right moment to exploit those weaknesses.

“The car is awesome and there’s definitely more to come from me but yes, I’m pretty happy to have been competitive, busy and relatively fresh at the end of it all.”

In his first visit to the circuit and first time in a current generation F3 type car, Leitch impressed with a fourth place in his debut race. This was the BlackArts Racing team’s best ever result in the championship.

The 23 year old then went one better in the second F3 race at the Sepang International Circuit, scoring a third place finish. He backed up his strong performance in the car with another fourth place, an impressive run after starting from ninth on the grid. Leitch ended the weekend sitting third in the championship behind double race winner Ukyo Sasahara and Red Bull Junior driver Jack Doohan.

“The key thing about jumping into the F3 car was that you only require about half the brake pressure of the Huracán,” he added. “I think that was one of the reasons why in the F3 races I was able to come on very strongly in the later laps as I was able to hit the required pressure easily in the F3 car as others faded a little towards the end of the race.”

Leitch will now focus his efforts on the Trofeo Series and will contest all of the championship rounds. Next up are Suzuka and Fuji Speedway in Japan, followed by race weekends in Yeongam in Korea and Shanghai in China. The final round of the 2019 season will be held just prior to the World Final, which this year is hosted on the Spanish Jerez circuit in October.