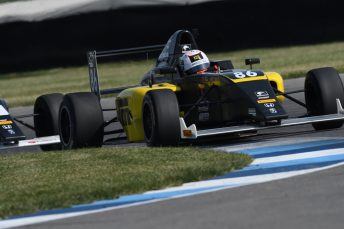 New Zealand’s Brendon Leitch showed he has some strong pace in a Formula 4 single-seater race car when he contested the second round of the Formula 4 United States Championship, which took place 8-11 June at the famed Indianapolis Motor Speedway.

The 22-year-old from Invercargill, who races with an all-Kiwi team as the only New Zealander in US F4, described the three-race event as “a very up and down weekend”. Despite his best efforts, Leitch was frustrated not to be able to convert his pace into a points-scoring result on the Indy road course.

Fourth quickest of 30 F4 competitors in the first practice on Friday (9 June) and seventh fastest in the second practice, when it came to qualifying, Leitch and many of his competitors were hampered by the 30-minute qualifying session being run primarily under caution so the opportunities for a clean, fast lap were limited. Leitch qualified 12th quickest before organisers pinged him a 10-place grid penalty for allegedly causing a collision at the previous round in Miami (he was one of six competitors penalised in this way).

“The decision was made based on poor footage,” says Leitch. “After reviewing some newly found footage last week, they realised they had made a mistake but weren’t willing to reverse the decision. Bit of a shame, but that’s how it goes sometimes unfortunately!”

Starting the first 30-minute race 21st on the grid, Leitch carved through the field to finish a very credible 13th place in the ITM-branded, Honda-powered F4 car. Setting the fifth quickest lap time during the race put Leitch into fifth place on the grid for race two.

Leitch raced strongly among the front-runners for the second 30-minute race and was looking good to finish in fourth place when his car ran out of fuel on the last lap. “I was really happy with our speed in race two. Even though it didn’t end well, we showed our speed and I’m really excited for the next round!”

Starting the weekend’s final 30-minute race in seventh, Leitch then had to contend with an overheating engine. The Kiwi Motorsports driver did well to bring the car home in 14th place, saying the overheating issue cost him a lot of speed in the final race. “Very unfortunate, but that’s all part of the sport.”

Leitch says his competition in the US F4 Championship is varied. “There are some very good drivers no doubt. But being a very fresh series, there are some very new drivers who don’t have lots of experience in racing as of yet, so you’re certainly aware of this.”

The Kiwi Motorsports team is managed by Nelson’s Garry Orton, director of Nelson-based Victory Motor Racing who ran all four of Leitch’s Toyota Racing Series campaigns. Leitch is delighted how well the team is working together at just their second event in the US championship. “Garry does a great job running the team and between them all they have so much knowledge. We’ve made a big step forward developing the car over the weekend and during the test we had in Dallas the previous weekend – the F4 car is much closer to where it needs to be.

“I also tested in a F2000 car in Dallas, which went very well. The team would like me to do some more testing for them which is great in terms of more seat time and also more exposure in the US.”

Leitch now returns to New Zealand and his job as a mechanic and hot lap driver at Highlands Motorsport Park – interspersed with plenty of physical and mental preparation – before returning to North America for round four in Ontario, Canada in early July.