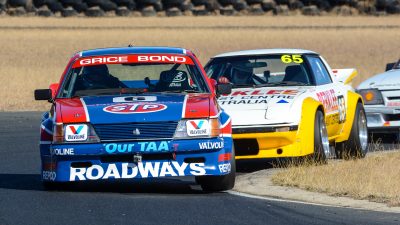 A record-breaking entry will head to Morgan Park for Historic Queensland over the weekend of July 14th to 15th and Heritage Touring Cars’ Legends of Bathurst are pleased to be a big part of it. 29 of the series’ historic Australian touring cars are signed up for the event and set to put on a great weekend’s racing.

Competitors are itching to get back to Warwick to drive the challenging Morgan Park circuit and its iconic sweeper around the back of the circuit. We’ll be contesting the third round of the 2018 series during the event and we’re looking forward to driving in Queensland weather after a wet Saturday at Sydney Motorsport Park.

Group A will present an excellent representation of the more-modern muscle car era. Terry Lawlor and Tony Karanfilovski will be two drivers to look out for, piloting a pair of RS500s. After unfortunately missing Muscle Car Masters, we’re looking forward to Tony opening up the ex-Glenn Seton Peter Jackson Ford Sierra RS500 in Queensland.

Gregory Keam will be bringing out the 1984 Capri Components Ford Mustang again after a successful run at Muscle Car Masters. The car will be driven by Justin Matthews, and we’re looking forward to seeing (and hearing) it at full race pace. This is one of the first Group A cars built in Australia and it ran in the first Australian Group A races at Sandown and Bathurst in 1984. The car was owned throughout the Group A period by Lawrie Nelson, racing periodically all the way up until the end of the era – 1992.

Keeping the big Fords honest will be a trio of Group A commodores in the VK of Wayne Clift and VLs of John Douglas and Adrian Allisey. Wayne built the VK in 1986 from an HDT-supplied Holden Motorsport shell and has owned the car ever since.

We’re looking forward to seeing what Duncan Mackellar can do in the 1990 Italian Superturismo Championship Schnitzer BMW M3 after putting the car on the trailer all-too-early at this year’s season opener at The Bend. He’ll be fending off the JPS M3s of David Towe and Peter Jones.

Toyota will be very well represented in Queensland, with five of the marque’s classic touring cars set to compete. Bob Holden will compete in his Corolla FX-GT and be joined by two of his team cars in the form of David Paterson’s ’83 AE86 Sprinter and Terry O’Beirne’s original Bob Holden/TOM’s Corolla FX-GT.

Group C will stage a Ford VS Holden duel in the big cars, with the ex-Murray Carter XE Falcon of Glenn Gerstel and Army Reserves XD Falcon of Frank Binding squaring off against the STP Roadways VH Commodore of Ed Singleton and Re-Car VC Commodore of Lindsay Woolard. Michael Logiudice will be in amongst it in his Torana A9X, while Phil Verwoert will continue his campaign in the Berklee Mazda RX7.

Peter Woods is somewhere in the middle when it comes to raw cubic capacity and will be giving Volvo a good name in the fierce Scuderia Veloce Motors 242GT from 1979.

Finally, we come to the under two-litre cars, which consistently punch above their weight in terms of pure racing action. Neville Butler, Gregory Keam and Russell Keam will compete in a trio of Escorts. Neville and Greg will be on board Mk 2 cars while Russell competes in a Bob Holden Motors RS2000. They’ll be up against the Isuzu Geminis of Steve Axisa and Gavin Adamson.

The HRCC’s 2018 Historic Queensland is shaping up to be the historic motorsport event of the year here in Australia, and we can’t wait to get stuck into it. It will run at Morgan Park over the 14th and 15th of July. For more info, see the HRCC’s website at www.hrcc.org.au.
Stay tuned to www.heritagetouringcars.com.au for more from the Legends of Bathurst!