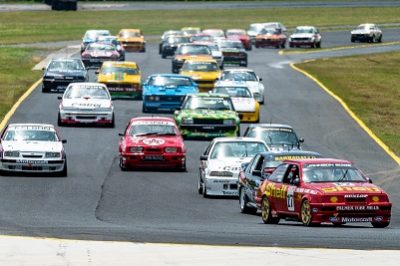 This weekend, April 13 – 15, will see the 2018 Heritage Touring Cars series kick off at Australia’s newest motorsport facility – The Bend Motorsport Park in Tailem Bend, South Australia. We’ll be bringing a full field of 33 classic Australian Group C & A touring cars to Round 1 of the 2018 Shannons Nationals.

We’ll also be welcoming new drivers and cars to the series at The Bend. Darryl Leslight will have his first run in the ex-Colin Bond Masterton Homes Capri, Ian Helsdon will drive one of the last Group A cars built in Australia – a Toyota Corolla Sprinter that had time for just six races in period – and Tony Karanfilovski will enjoy his first run in the series in an ex-Glenn Seton Peter Jackson Ford Sierra RS500.

Karanfilovski will have two other Sierra RS500s to play with, as he’ll be joined by Terry Lawlor in the Shell Dick Johnson car and Stephen Webb in the Caltex Colin Bond RS500.

The Fords will face stiff competition from an impressive contingent of Bavarian muscle. Adrian Brady will be piloting the ex-Jim Richards JPS BMW 635 CSi that dominated the inaugural 1985 Group A season here in Australia. This very early Group A car will be joined by its Group C sister car – Dean How’s 1981 BMW 635 CSi.

No fewer than four M3s will complete the BMW contingent at The Bend, with two Schnitzer BMW factory cars amongst them. Bill Cutler will pilot the ex-Roberto Ravaglia/Emanuele Pirro Schnitzer BMW which raced in the 1987 James Hardie 1000, a round of the inaugural World Touring Car Championship, and Duncan MacKellar will debut another ex-Pirro/Ravaglia Schnitzer M3, which also has history with Johnny Cecotto and Thierry Tassin.

David Towe will be on board his iconic ex-Richards/Longhurst JPS M3 and Rick Allen will return to the series aboard the ex-Tony Longhurst/Johnny Cecotto Benson & Hedges BMW E30 M3 that he drove beautifully in 2017.

Fans of Group A Holdens will have some magnificent machinery to cheer on in this first round of the 2018 Heritage Touring Cars series. Jamie McDonald will join Darryl Leslight and bring a second Masterton Homes car out to play, piloting the ex-Steve Masterton VK Commodore. We’ll also see two iconic VLs take to the track, with Adrian Allisey on board the ex-Leeson/Willmington Holden ‘Walkinshaw’ VL and Mark Taylor set to run the ex-Paul Trevethan/Andrew McDowell car.

While they may be a little outnumbered by Holden in Group C, the Fords are sure to bring some great racing. John Mina and George Nittis will represent Falcon V8s, with John piloting the ex-Jim Keogh John Sands XD and George aboard the Murray Carter XE. Two Escort Mk. 2s will join us over the weekend, piloted by Justin Matthews and Neville Butler.

The Group A Corollas of Bob Holden, Craig Foster and David Paterson will join Ian Helsdon in what’s sure to be some of the most exciting racing over the weekend. Bob Holden will pilot one of his own Bob Holden Motors Corolla FX-GTs, Craig Foster will kick of his sophomore Heritage Touring Cars season in the ex-Toyota Team Australia AE86 Group A Toyota Corolla Coupe that he debuted at Phillip Island last year and David Paterson will continue his storied Heritage Touring Cars campaign in the ex-Bob Holden Motors Corolla Sprinter.

Boasting just a little more cubic displacement, the Gibson Motorsport Skyline GTS-R of Mark Eddy will be joining them in Group A. The ex-Roger Hurd/Scotty Taylor Xerox Shop Mitsubishi Starion of Craig Neilson will complete the Group A competition.

Finally, Justin Nilsson will bring out his Nissan Pulsar EXA Turbo, which was driven in period by legendary lady race car driver Christine Gibson and (at the time) rookie Glenn Seton. Justin will be joined by series regular Phil Verwoert in the Berklee Mazda RX7 to cap off a great collection from the Japanese marques.

Round 1 of the 2018 Heritage Touring Cars series will be held during the opening round of the 2018 Shannons Nationals at The Bend Motorsport Park from the 13th to the 15th of April. The event will be live streamed on Sunday – head to the Shannons Nationals website here to access the stream, or check us out on Facebook, where we’ll endeavour to share the stream as well.