Leahy lays down the challenge at Fuchs Winternationals

Leahy lays down the challenge at Fuchs Winternationals 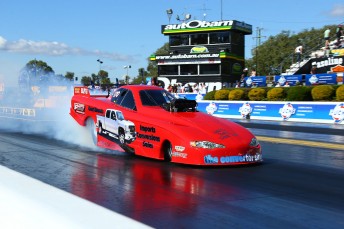 Greg Leahy only needed one qualifying run to occupy top spot in Competition Eliminator going into day three and potentially smash the BB/FCA National record in the Aeroflow Sportsman Drag Racing Championship at the Fuchs Winternationals.

“We’ve had a plan over the last 12 months to build this car and approach the meetings that we’ve gone to with an intention of top qualifying, try not to hurt our index too much but being reasonably dominant in Comp,” he said.

Leahy won’t be taking the track in the final qualifier tomorrow but when asked about his expectations forSunday his answer was simple; “Win.”

Daryn Schuster went under the National D/AB record in Competition Bike with his 8.414 on a 9.10 index good enough to occupy first with one qualifier remaining.

Rounding out Group 2, Kelly Bettes in the Jett Racing Datsun Ute currently lies first in Super Compact after putting down a 7.325 on a 7.35 index. Chris Hall is second going into day three from Ben Graham, Reece McGregor and Brett Morgan.

The scariest moment of the weekend so far came when Danny Tuelstrup barrel rolled his dragster after deploying the chutes and locking up the rears sending the car left and spectacularly rolling over along the wall. Tuelstrup climbed out of the car immediately and was deemed okay after being looked over by medical staff.

In other Modified action Greg Wardle went even further under the B/HR record than his 8.771 on Thursdaypushing his ET to 8.757.

Amazingly that was only good enough to keep Wardle in 34th place but it was Andrew Musgrave who held onto the number one position with a 6.399 at 218.94 mph. He leads Shane Seawright, Rob Harrington, John Smith and Dallas Everett in fifth.

Neil Maxwell goes into eliminations as number one qualifier in Super Sedan thanks to a 7.333 at 187.36 mph from Darren Saliba, Gay Brett, Tony Agius and Harry Somer rounding out the top five.

Modified Bike sees Denis Ryan lead the field into eliminations with an 8.573 at 147.10 mph. Joining him in the top five are Reegan Ward, Daniel Selki, Kevin Cleeve and Anthony Duncan.