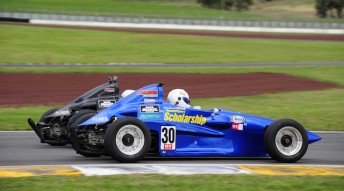 MEDIA RELEASE: Pukekohe teenager Liam Lawson has capped off his motor racing scholarship year by claiming the Rookie of the Year title at the final round of the New Zealand Formula First championship.

Lawson became the 15th annual winner of the SpeedSport Scholarship last May and led the race for novice drivers throughout the eight-round series, securing the title with one race remaining at Taupo.

The just turned 14-year-old also notched up podiums and a race win to finish sixth overall.

The former young kart racing star turned to motor racing after winning the SpeedSport Scholarship, which has been the springboard for some of this country’s leading motor racing stars.

“It’s been an awesome year. Everything I’ve learnt on and off the track is really going to help in my future racing. A big thank you to Dennis and the team, and my engineer Johnathan for their support this year. Winning the scholarship was a massive opportunity and will definitely help me moving forward,” said the Pukekohe High School student.

Sabre-based scholarship drivers have won the Rookie of the Year title fourteen times in 15 years.

Formula First is regarded as the first step in single-seater racing and Lawson is hoping to move forward to Formula Ford next season as he aims to one day compete in New Zealand’s premiere Toyota Racing Series [TRS].

Drivers are restricted to a minimum age of 16 to compete in the TRS wings and slicks cars so Lawson will spend the next two seasons developing his skills and race-craft to become prepared.

“I’d love to one day race in the New Zealand Grand Prix but there’s a lot of work to do before then,” said Lawson.

The Rookie of the Year title came on the same weekend as former SpeedSport Scholarship winners also made headlines.

Shane van Gisbergen won the 500th V8 Supercar race for Holden in Australia – driving for the Red Bull Racing team, while Nick Cassidy took the lead in the European Formula 3 championship in France after finishing in second place in all three races.