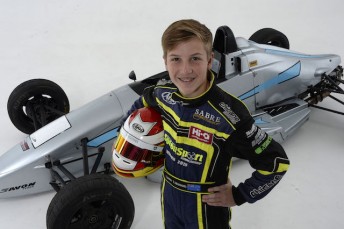 Lawson, who shot to prominence after winning the annual SpeedSport Scholarship ‘Star of Tomorrow’ program, will drive the current championship-winning car in both the South Island and the national championship F1600 series.

But it isn’t all good news for Lawson.

The car trailer his family purchased to transport the car to race meetings this summer was stolen last week from outside their home, after the thief hacked through heavy security chains to remove it.

“Two years ago we had $11,000 worth of our karting gear stolen and only half of that [value] was covered by insurance, so we’re pretty security conscious,” said Liam’s father, Jared Lawson.

“We believed the trailer was securely fastened but someone has still managed to make off with it.”

The former young kart racing star is, however, still upbeat about his coming season.

“This new race car is a step up in performance for me and I’m really excited about racing this car,” said Liam, who’s already had three test days in the Formula Ford ahead of the championship season starting in November.

“My ultimate goal is to have a crack at the [NZ] championship but I know there’s a lot to learn. My focus right now is to get to the front of the field and to win my first race in a new class,” said Liam.

Both the South Island series and the national championship offer great incentives for young race car drivers wanting to progress their careers. The South Island series offers a Formula Ford ‘works’ test drive in Australia while a prize for winning the New Zealand series is a chance to compete in the ‘Road To Indy’ shoot-out in the USA.

Between now and the start of the season Liam will be out raising further support for his Formula Ford campaign and plans to spend his school holidays talking to potential supporters about his motor racing plans.

Most professional motor racing drivers have succeeded in the Formula Ford category on their way to success and Liam knows this is the next step to conquer in his quest to one day represent his country in the New Zealand Grand Prix, and to compete in the Toyota Racing Series, the fastest racing cars in New Zealand.

But the 14-year-old has a couple of years to wait until he is old enough to contest the Toyota Series and the next two years are about honing his skills and experience to be ready.

“I’m really lucky to have some very experienced motor racing people come onboard to help guide me over the next few years,” added Liam.

Those backing the Pukekohe High School student see great potential, and with one of the best cars now secured for his next step, most of the pieces are in place for Liam to advance in the sport.

“We just need some more sponsorship support and we’re ready to race.”

And if his pre-season testing is anything to go by, Liam’s team has every confidence of a strong performance when the lights go out on the first race of the season.