Off the back of what was a notable performance in the recent National Street Stock Title, rookie driver AJ Lawrence has continued to make a reputation for himself, despite having only contested around a dozen race meetings, this time during last weekend’s Victorian Title at Mildura’s Timmis Speedway. 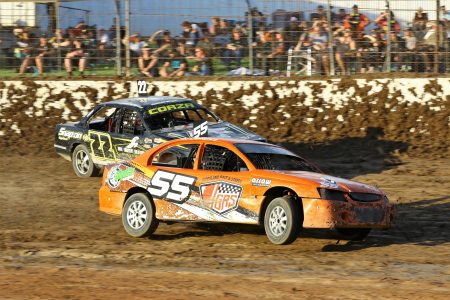 Unlucky not to earn a direct qualification into the recent National Title-deciding feature race, which was also held at Timmis Speedway, due to some power steering woes which prematurely ended his night, AJ Lawrence returned to the Mildura venue with some added confidence, not to mention being held in a much higher regard by his fellow drivers.

However, with added confidence and respect from his peers also came increased pressure for the 16-year-old driver, who was now unable to fly under the radar following his recent achievements, but that wasn’t enough to make him lose his composure during what is considered the largest Street Stock event in the country, second only to the National Title.

Impressively qualifying on the outside of the front row alongside Anthony Beare for the 35-lap feature race, Lawrence’s aim was to hold on for a top-five finish, although it appeared that Lady Luck was not smiling down on him, with his ongoing power steering issues causing him to retire to the infield just 11 laps in.

“It was definitely a disappointing way to end our Victorian Title campaign, but like at the National Title, there’s a lot for us to be proud of as a team and it’s nice to have been able to prove that our previous performance wasn’t just a fluke,” commented the Vic # 55 Ramsdale Wreckers & Mechanical / Gippsland Race & Street supported VY Holden Commodore pilot.

“The past two title events have proven to us that we have the pace to challenge for positive results, we just need to get our power steering problems under control, which we’ll be focusing on heading into the rest of the season.”

Racking up two wins and a third-place finish during Friday night’s heat races, Lawrence was sitting second in the point standings heading into night two. Keeping up his momentum, the Traralgon, Victoria-based driver scored another win and a runner-up finish in his remaining heat races, the last of which he achieved with no power steering; an issue that unbeknownst to him would be back to plague him during the feature race.

After taking his place alongside pole-sitter Beare, Lawrence didn’t quite nail his start, being pipped for second place and settling into third in the early stages of the race, before once again suffering at the hands of his power steering and slipping backwards through the pack.

Lawrence also paid homage to eventual Victorian Title winner Beare, who has given the young racer much support and advice during his debut season.

“I have to say a big thanks to Anthony. He’s one of Australia’s best Street Stock drivers, so for him to be helping me out is a massive bonus for me and something I’m extremely grateful for,” he added.

For his next appearance, Lawrence will be contesting the Street Stock Easter Extravaganza at Swan Hill’s Sonic Speedway on Easter Sunday (April 21), followed by the Top Gun event at Timmis Speedway on May 4.

Special thanks go to his mum and dad Kerry and Darron, pit crew member Shane, and the rest of his family and friends.