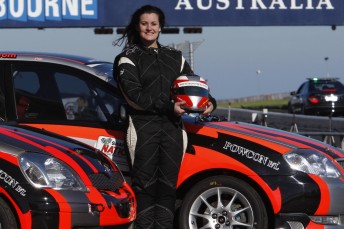 Long-time Australian Manufacturers Championship competitor Lauren Gray will make her comeback to national level competition this weekend as an entrant in the Great Southern 4 Hour – to be contested at the Phillip Island Grand Prix Circuit across May 23-25.

In what will be her first ‘major’ event back on-track since the birth of her first child William in August of 2013, Gray will join George Karadimas and Matt Lehmann at the wheel of the #34 Australian Auto Wreckers Ford Falcon XR6T for the second round of the AMChamp Series for 2014.

Previously Gray has competed in the Series for the family Lauren Gray Motorsport Team, claiming a class E championship in 2008 driving a Toyota Echo.

“I’m really looking forward to getting back in a car in the AMChamp series,” said Gray, of Point Cook in Melbourne’s Western Suburbs.

“I tested the Falcon at Phillip Island last week and was really happy with the day. The team has done a great job building the car and it’s good fun to drive. I think it will be a good package over four hours and we should be reasonably competitive.

“I have driven more rear-wheel-drive cars than front-wheel-drive recently so it’s been easy to adapt to the Falcon and get up to speed. I raced a Formula Vee at Phillip Island recently which helped get my ‘eye back in’, and the testing we’ve done before the round will obviously help.

“I’ve always really enjoyed the long-distance racing we’ve done in the Manufacturers Championship and I’m looking forward to getting back into it.”

Team owner Karadimas is certainly looking forward to welcoming Gray to his team for round two of the AMChamps.

“I think bringing Lauren on-board with the team for the Great Southern 4 Hour will allow us to show a very strong combination – she has a lot of experience and likes the car, is very good to talk to and is a very good ‘steerer’,” said Karadimas.

“I haven’t raced at Phillip Island myself since 2005, so it is good to know that I will have Lauren’s local expertise to help us step up our competiveness as well.”

In joining the Australian Manufacturers Championship for the Great Southern 4 Hour, Gray is just one of a number of new faces coming to the Series as it continues to grow, with the second round of the championship to host 19 cars with 39 drivers across May 23-25.

The Australian Manufacturers Championship, part of the Shannons Australian Motor Racing Nationals, allows a wide-ranging list of vehicles sold in the domestic automotive market to take to the track and compete for a prestigious CAMS title.

Featuring everything from high-performance vehicles all the way through to those running on alternative energy, the Australian Manufacturers Championship places style alongside muscle, ingenuity versus agility, and continent against continent across five national circuit racing events: