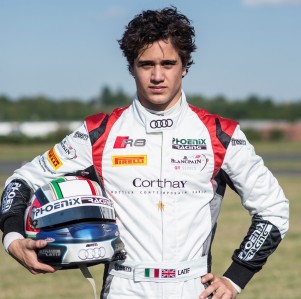 A former front-running karter, Latif has since gone on to enjoy remarkable success in sportscar circles, competing in the legendary Le Mans 24 Hours, Rolex 24 at Daytona and Petit Le Mans in addition to becoming the youngest-ever outright winner of a VdeV sports prototype race.

Indeed, for a driver at such a formative stage of his career, the 18-year-old Londoner’s endurance racing credentials are outstanding, with a brace of class victories in the Gulf 12 Hours and the 2014 Blancpain Sprint Series Pro-Am Championship crown already to his name.

In evidence of his versatility as a competitor, Latif was also invited to participate in a test outing in Audi’s DTM touring car at the end of 2013, and he subsequently campaigned one of the German manufacturer’s R8 LMS GT3 sportscars in the prestigious Bathurst 12 Hours earlier this month.

Despite being the youngest European driver in a field of more than 50 entries, the erstwhile Marlborough College student – who has a deferred place at Loughborough University to study Mechanical Engineering – finished a superb fifth-in-class on his debut around the fearsome Mount Panorama Circuit.

Buoyed by that result and following a productive testing schedule with WSM, Latif is now ready to embark upon his new adventure across the other side of the pond – beginning with the warm-up Winterfest curtain-raiser at NOLA Motorsports Park in Louisiana this coming weekend (19/20 February).

“Since graduating from karts at the end of 2011, I’ve been lucky enough to be able to explore a number of different disciplines within the sport – from single-seaters to sportscars and tin-tops,” explained the Kensington teenager, a joint UK and Italian citizen. “I’ve competed in some of motorsport’s biggest races and learned a tremendous amount that has helped to make me a more rounded driver.

“With the benefit of that experience under my belt, I feel the timing is now right to turn my attentions towards forging a long-term career in open-wheel racing, and the Mazda Road to Indy programme offers fantastic opportunities for progression.

“There is a very clear path laid out from Pro Mazda through to the pinnacle of the IndyCar Series, which is hugely motivating – and you need only look at somebody like Jack Hawksworth, who used to coach me back in my karting days, to see what can be achieved.

“A lot will be new to me this year so I’m not putting any undue pressure on myself to get instant results, but I have a great team behind me in WSM and with their support and a lot of hard work, hopefully one day I can go on to follow in Jack’s footsteps by joining the IndyCar grid.”

“We are excited to have Alessandro with us in the Pro Mazda Championship in 2015,” he affirmed. “We have had a solid amount of testing and preparation and feel good about where we are going into the season. He still needs to learn the tracks and the series is very competitive, but we know we will do well this year with him in the #14 car.”