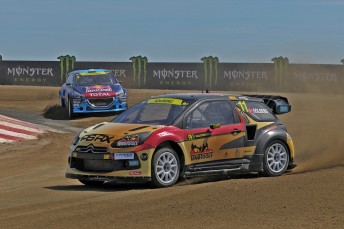 A recent report carried out by leading sports marketing research company Repucom in conjunction with IMG, which runs and promotes the Championship, has revealed a sharp increase in TV figures across all regions.

Pan-regional broadcasters such as FOX Sports in South America and BeIN Sport across the Middle East and America covered World RX for the first time last year, helping to open up the sport to a host of new territories.

As a result, combined household reach nearly doubled in 2014 as the number of broadcasters covering World RX rose to 58.

World RX of Sweden attracted the largest global audience with 3.3 million viewers watching the event’s TV coverage around the world, followed by Turkey which amassed an audience of 2.5 million people viewing the event’s dedicated broadcast.

The Championship has also witnessed huge growth via its social platforms with Facebook likes showing a percentage increase of 348 percent over a 12 month period.

Twitter saw a 202 percent increase in followers, while Instagram proved to be the biggest growth platform with a 900 percent rise.  Overall, the average reach across all social media platforms per event rose from 430,000 in 2013 to 6.7 million in 2014.

Live event attendance was another success story with a 130 percent increase in fans attending races in 2014. Driver entries rocketed with 112 different Supercar drivers competing throughout the year.

Another indication of growing economy in the World RX paddock is the increased sales of official merchandise onsite with a 190 percent rise in combined sales through 12 events.

World RX Managing Director for IMG, Martin Anayi, commented: “The latest World RX figures demonstrate rapid growth across the board and some of the percentage statistics, especially our digital platforms, are remarkable.

“We have seen a sharp increase in broadcast figures in only 12 months too but increased coverage on more widely available TV channels is going to be our main target for 2015.

“We’ve had to think outside the box over the past 24 months and mix coverage on our traditional broadcast partners as well as use other platforms such as Livestream, Facebook and YouTube to reach our fans in territories which don’t have dedicated World RX TV coverage.

“These latest TV figures are a great start but we’ll continue to work on developing the Championship’s profile even further.”