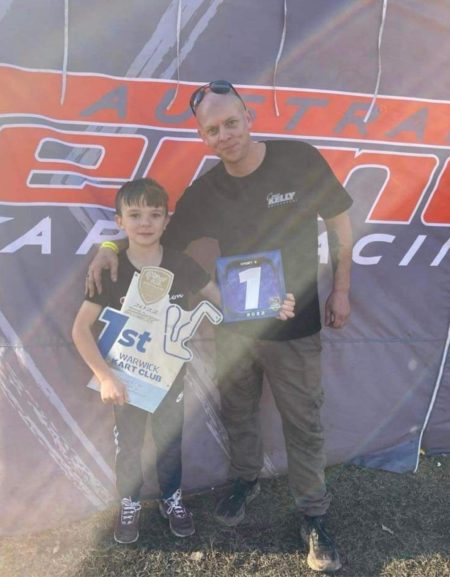 Cruz Kelly head to the Warwick Kart club with one goal and one goal only, to become Queensland state champion! Kelly has had a breakout season in 2022, becoming the Victorian state champion, winning round two of the SP Tools Australian Kart Championship and is currently leading the Australian Kart Championship. With rain, rain and more rain forecasted for the weekend and Cruz without his father due to sickness, the young champion needed to dig in to add another championship to his tally.

Kelly spent the day Friday putting together laps and trying to get a package strong enough with his mechanic Chris Schofield. Qualifying was the starting point of the weekend and Tecno Karts Australia entry was looking to get as far up the thirty-kart field as possible. Cruz quickly made his way into the top twenty and then fifteen but was struggle to get his kart in the wet setup window. Kelly continued to push as hard as possible and was able to set the eleventh fastest time of the session and work to do in the heat races.

Cruz and his mechanic Chris tuned the kart up and the young driver was ready to put himself up the grid in heat one. The Anarchy Kart sport backed entry got a lighting start to heat one moving up five spots in the opening lap. Kelly made his way into the top five by lap two and put his head down chasing after the top four drivers. Kelly was driving his heart out and was able to make his way into the top three drivers in the back end of the race. Cruz put in an enormous performance moving up eight spots and crossing the line in third spot in a great recovery drive!

Kelly had the eyes on and was looking to continue the charge forward through the Cadet 9 field. Kelly had a completely different start to previous heat, dropping back to position thirteen by the completion of the opening lap. The CS Pure Racing backed entry quickly made his way back up into the top ten and was on the charge forward once again. Cruz was able to make up another few positions and was pushing hard towards the top five. Kelly was able to recover well and cross the line in sixth position and now starting out of fifth spot for the third heat.

Cruz and Chris once again tuned the kart up and were looking to continue the charge forward and challenge for victory. The Tecno Karts Australia backed entry jumped up into the top three but was in a battle for position. Kelly swapped positions in the top five and wasn’t close enough to challenge the top two, battling out the front of the field. Kelly came home with another strong top five finish and this put him out of fourth spot for the championship decider!

The final was back on dry conditions and Cruz was looking to dig deep and try and take victory. The Anarchy Kartsport backed entry jumped into position two in an epic opening lap and was in the front pack challenging for the championship. Kelly swapped positions multiple times and started the final lap of the decider in third spot. In a simply breath-taking final lap, Kelly made the move to second spot on the second last corner. In what had to be seen to be believed, Cruz put a move down the inside for the lead on the final corner. Kelly was able to cross the line first and win the Queensland Kart Championship!

Cruz father Marcus spoke post weekend on his son second state championship! “It was a tough one from the outset, I had to stay at home while Cruz and his mum Lisa went up to Queensland. Chris Schofield was able to jump in and spin spanners which was a great help. Cruz never gave up all weekend and didn’t lead any laps except the championship winning lap! We can’t thank Chris Schofield, Tecno Karts Australia, Anarchy Kart Sport and CS Pure Racing for their support”. Kelly will be back on circuit for the fourth round of the SP Tools Australian Kart Championship at the Emerald Kart Club.