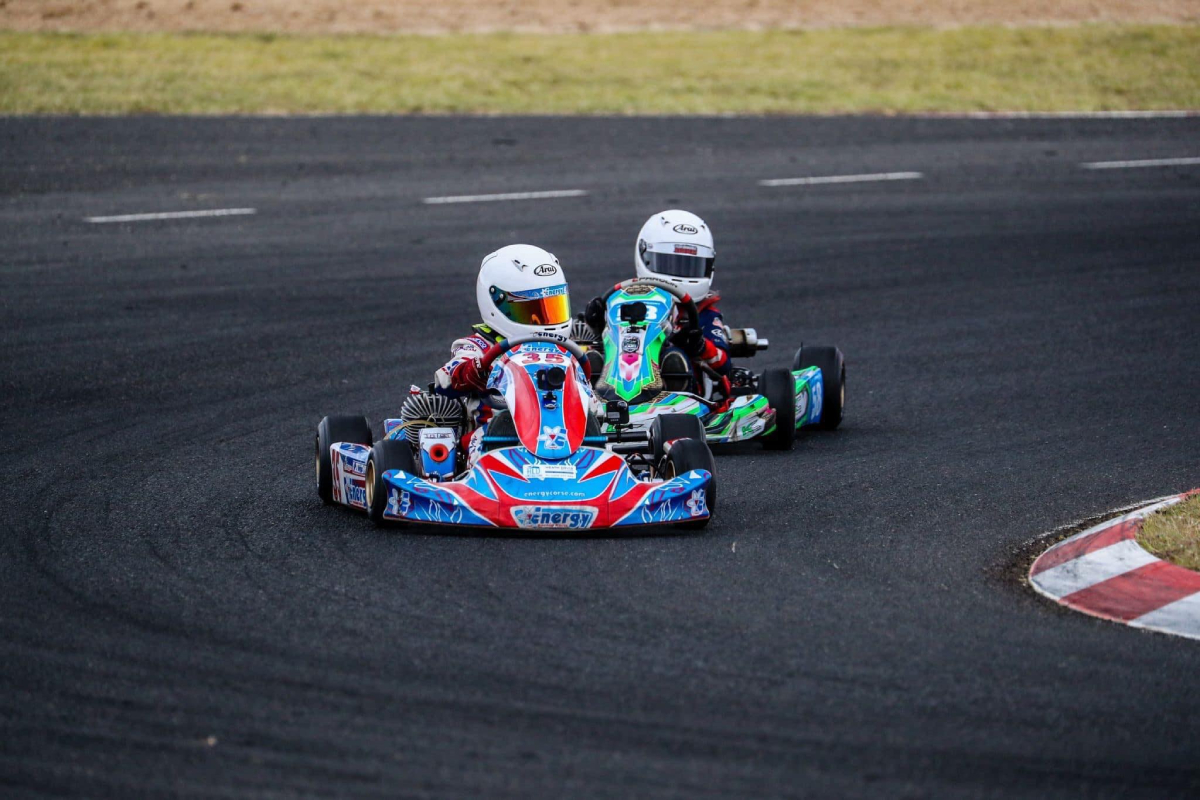 Energy Corse Australia has had a blockbuster 2022 and that continued over the weekend.

The twelve driver team across seven classes made their way to the penultimate round of the SP Tools Australian Kart Championship at the Emerald Kart Club.

The Cian Fothergill Energy Corse team has already taken out three state championships this month and was looking to take add some Australian Kart Championship glory as well.

Larsen led the way in qualifying with a brilliant sixth place, while Paige and Chelsea Flack were able to come just outside the top fifteen in sixteenth and position twenty.

Larsen was inside the top ten in all of his heats with a sixth in heat three and a brilliant second place in heat four the highlight.

Both Chelsea and Paige Flack consistently raced on the edge of the top fifteen in the heats improving their racing.

Larsen was right in the podium battle in the final and was able to come away with a brilliant second place finish.

Chelsea Flack was able to make her way into the top fifteen with a brilliant fourteenth position, while Paige Flack wasn’t far behind in seventeenth position overall.

Western Australian Jake Klarich was the sole KZ2 driver for the Energy Corse Australia team. Klarich qualified in a disappointing position twenty but rebounded moving up a remarkable nine positions in heat one and six positions in heat three.

Jake got another top fifteen in heat three but blistered his way into the top ten in position seven.

Klarich saved his best result for last making his way into the top five in a brilliant fifth position overall!

Championship contender Toby Dvorak once again took to the track in the KA2 Junior class in his Energy Corse kart.

Dvorak qualified just outside the top fifteen in position seventeen but moved into the top ten in sixth by the end of heat one.

Dvorak then had rotten luck in the rest of his heats having a DNF in heat four and being involved in incidents in heats two and three.

Dvorak showed excellent pace and determination and charged back into the top ten in the final for ninth position overall.

Burke qualified just outside the top ten in position twelve but put his Energy Corse Australia kart to good use in the heats, with two excellent fourth placings in heats two, and three,  with another top ten finish in the final heat.

Ky raced hard and fast in an extremely tough KA4 Junior field, coming home just outside the top five in the final in sixth place overall.

Tom Dare took his place in the ultra-competitive TAG 125 field for the Energy Corse Australia team.

Dare qualified in position twenty five overall and was consistent finishing all four of his heats and running around the edge of the top twenty five in one of the toughest fields of the weekend.

Tom put in his best performance of the weekend in the final pushing hard on the back of the top twenty and coming home in position twenty one overall.

Tennant was able to put his Energy Corse Australia entry on the front row of the grid in second position with O’Neill just missing the top ten in position eleven.

Both Tennant and O’Neill had excellent pace in the heats with two top fives for Tennant in the heats, while O’Neill was able to move his way into the top ten.

Tennant was unfortunately involved in an incident on the opening lap putting him to the rear of the field.

Kurtis put in a storming drive making his way back up to position fifteen overall in a great fightback. O’Neill made his way into the top ten off the start but didn’t have the pace he needed to challenge in the top ten and end up dropping back to position twenty overall.

Mcgill set qualifying alight putting himself on the front row of the grid, with Flack and Burke both in the top ten in position six and ten overall.

All three drivers had excellent heats with Burke taking a win and a second place, Flack taking a second and two fourths and Mcgill finishing inside the top ten in all four of his heats.

Burke led the way in a tough final coming home just off the podium in position four overall.

Mcgill was just behind in fifth position having two Energy Corse Australia drivers in the top five, while Flack unfortunately was out of contention on the second lap of the race with a DNF result.

“The highlight was the cadets all weekend.

“Jack Larsen finished second with his first podium in AKC in Cadet 9, Cadet 12 had three potential winners all weekend with multiple top three finishes in the Heats and a second in qually.”

The Energy Corse Australia team will be looking to finish the championship on a high with the fifth and final round taking place at the Newcastle Kart Club next month.