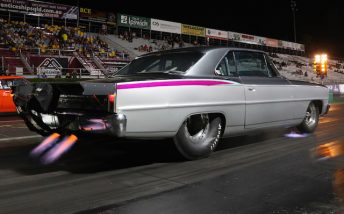 MEDIA RELEASE: One lucky drag racing fan got more than they bargained for at the Willowbank Raceway New Years Thunder event when they had the ride of a lifetime down the drag strip on board with USA Drag Racing Legend Larry Larson.

Larry Larson has been on tour with his Drag Week-dominating 1966 Chevy Nova and his 5.8-second, street-legal Chevrolet S-10 for the Willowbank Raceway Outlaw Armageddon Series.

Thomas Bates was chosen from thousands of spectators in attendance to enjoy the joy ride in Larson’s world famous Chevy Nova.

It was behind the wheel of the Nova that Larson forged his five-year winning streak. Entirely steel-bodied, the car boasts the usual street car niceties like working head and tail lights, a working stereo and perhaps more interestingly, a twin turbo 565-cube Moran Motorsports motor backed by a Lenco 5-speed that earned him the accolade as the first-ever 6-second pass at Drag Week all the way back in 2010.

Larson didn’t disappoint his lucky passenger or the jam packed grandstand of spectators in attendance with a full track burn out before hitting over 250kmph in 4.8 seconds over his eighth mile pass.

It was only the second time Larson had taken a passenger down the drag strip after his wife Sherry took a ride down the track during testing earlier in the day.

Larson has been racing professionally since 1992 and in 1996 extended to opening Larson Race Cars – the shop responsible for the build and maintenance of his own fleet of Drag Week contenders, as well as some of the fastest street cars in America that he’s hand-crafted for customers.

His achievements have elevated him beyond the status of a mere racer and nowadays Larson finds himself adopting a Crew Chief role for many teams.

The passenger pass wrapped up Larson’s Australian tour which saw him race against everything from the country’s fastest street cars to the supercharged Pro Slammer cars of Ben and Victor Bray over four events at Willowbank Raceway.

His beautiful wife Sherry was also given the chance to go for a ride the first time ever, Willowbank Raceway also gave her the opportunity of a lifetime to watch top fuel from the starters box.