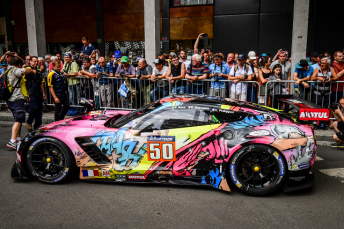 Larbre Competition is ready for action in the 85th running of the Le Mans 24 Hours (17-18 June), after successfully preparing its LMGTE Am-entered #50 ‘Human’ Corvette C7.R ahead of the endurance classic.

Running an Art Car for its 24th appearance at the twice-around-the-clock event, the French team participated in the traditional Pesage ceremony on Sunday (11 June), with the Larbre trio of Fernando Rees, Christian Philippon and Romain Brandela receiving a warm welcome at the Place de la République.

Ahead of its third Le Mans 24 Hours bow, the #50 Corvette C7.R successfully went through the Automobile Club de l’Ouest’s mandatory technical scrutineering, before its crew passed the administrative checks.

The #50, with its striking ‘Human’ livery, has starred during the Le Mans 24 Hour build-up and the Val de Vienne-based squad highlighted its potential during the official Test Day by going second fastest in the LMGTE Am class.

Rees, Philippon, and Brandela returned to the pit lane to attend race control’s mandatory briefing on Tuesday (13 June), before joining in the official drivers’ picture and autograph session.

On-track action got underway with a four-hour free practice session today at 16:00, as the team prepares for first qualifying, which starts at 22:00 at the daunting 13.629 km venue.

Christian Philippon: “Scrutineering was amazing, it was like I was dreaming and all the photos I have collected over the years were brought to life. The autograph sessions with the fans were wonderful, as I am also a fan of the 24 hours and understand the enthusiasm. Over the years I have been the one getting the drivers’ autographs!

“Sunday was definitely the highlight of the week so far, especially when we took the official photo with the team and the car. These will remain in the Le Mans history for many years to come.

“The press conference was great and we are now ready to focus on the racing and driving the #50 ‘Human’ Corvette C7.R.”

Romain Brandela: “I last raced at Le Mans two years ago and immediately noticed the increased interest for our car this time. We saw it during Sunday’s scrutineering, where a lot of people wanted to see and meet us. They all tell us that we have the nicest car and whenever someone in the paddock stops me they say the same thing.

“Tuesday’s autograph session was packed with fans asking for posters to be signed. The car has great support and the passion from everyone around us is fantastic. Christian [Philippon] and I love Le Mans and racing in general, as gentlemen drivers we are living a dream. I have done the French endurance classic twice already but the magic isn’t lost!

“I was glad to see the interest from the international media this morning. The car makes people smile and gives off a positive vibe.”

Jack Leconte, Team Manager: “Scrutineering is always a great event as it is easier for the fans to attend and meet the team. We were one of the first to go through the proceedings and everyone was eager to see the #50 ‘Human’ Corvette C7.R in the flesh. It was the first public showing in the town, with the next being the Parade on Friday night.

“The drivers were giving autographs for more than 30 minutes and our car is definitely one of the most popular this year. A second autograph session on Tuesday at the circuit also proved a huge success, with 3000 posters handed out! Pit lane attendance was great but the interest was mainly around the #50’s garage.

“The press conference this morning went well. It is important to promote this fantastic project to all the Le Mans fans around the world. It was also important to welcome the media and give them the opportunity to answer any questions they have.

“The first qualifying session gets underway later, giving fans a chance to see the ‘Human’ car and its DayGlo paint on the Circuit de la Sarthe.

“Tonight the aim is to set a competitive time for qualifying, as tomorrow we’re bringing a lot of new parts for the race, which we will bed in over a minimum distance of 200 kilometres to make sure they work well and are in the best possible condition.”

*Timings given in local time