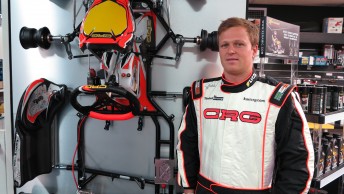 Lane Moore has returned to the Australian CRG factory

Gold Coast karting stalwart, Lane More will make a return to Team CRG Australia for the remainder of the 2016 karting season.

Having concentrated on the Rotax form of racing over recent years, Moore will couple his Rotax Pro Tour commitments in Rotax Heavy with TaG (Touch and Go) racing in the Australian Kart Championships.

His first appearance back in Team CRG colours will be at the fourth round of the Rotax Pro Tour in Ipswich on June 4-5.

Moore will be utilising the PRD Galaxy engine in TaG competition. The emerging 125cc water-cooled engine that qualified on pole in the first round of the Australian Championship is manufactured by Team CRG Australia importer, St George Kart Centre.

Moore will be accompanied to CRG with his father, Kerry – an ever present figure in Australian karting – tuning Lane’s karts throughout his career.

The major events in Australia this year have seen CRG elevate itself to becoming the dominant Cadet & Junior chassis in most forms of karting at the National and State Level – most recently taking five State Championship round wins across four States at the beginning of May.

Moore has taken a fresh approach to season 2016 and has impressed Team CRG Australia with his rejuvenated commitment to the sport after his 2015 season was thwarted by an off-track motorcycle injury.

“I am very pleased to announce that I will be joining CRG,” said Lane Moore. “This is a decision that was not taken lightly. I have always had a very good relationship with Chris, Mattia and Darren.

“My father, Kerry, has had a longstanding and healthy relationship with both Peter and Chris Dell spanning many years.

“Team CRG Australia has fantastic trackside back up, which is something I am really looking forward to. After spending some time at the CRG factory, I now can’t wait to get out on the track.”

Both Lane and Kerry Moore have been welcomed by Team CRG Australia Chassis specialist, Mattia Madami.

“We really can’t wait to have Lane come into our team,” beamed Madami. “He’s one of the most committed drivers in Australia and has taken a completely new focus to his racing this year.

“He’s got a new found determination and up-specced his fitness big time this season. His father Kerry is another well known Australian karting paddock character and it will be great to have him on board also.

“The approach that Lane and Kerry take to their racing are the types of personality we want for our young drivers and to keep everyone in the team on their toes.

“Both myself and Darren King (Team Manager) are excited by having Lane as part of Team CRG Australia.

“He brings an X-factor, something a bit different to the paddock and it will be great to see the impact he has on our team and how we can use his knowledge and experience in the 125cc water-cooled TaG style of racing to continue to develop the PRD Galaxy engine.

“He will go to the next round of the Pro Tour fourth in points and is within striking range of taking out that point score with four rounds to go and it will be exciting to see what he can do in the Australian Kart Championships in TaG.”